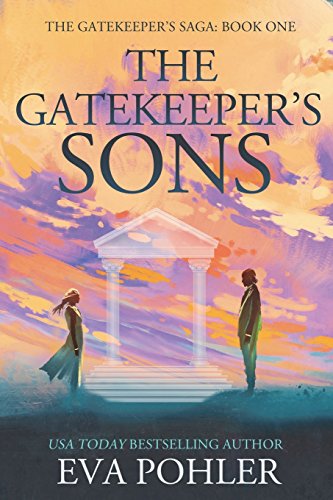 Fifteen-year-old Therese watches her parents die. While in a coma, she meets the twin sons of Hades—Hypnos, the god of sleep, and Thanatos, the god of death. She thinks she's manipulating a dream, not kissing the god of death and totally rocking his world. Than makes a deal with Hades and goes as a mortal to the Upperworld to try and win Therese's heart, but not all the gods are happy. Some give her gifts. Others try to kill her.The deal requires Therese to avenge the death of her parents. With the help of Than’s fierce and exotic sisters, the Furies, she finds herself in an arena face to face with the murderer, and only one will survive.

Eva Pohler is a USA Today bestselling author of over twenty novels for teens and adults.

The motivations, anguish, romance, and drive for revenge and resolution that permeates The Gatekeeper's Sons is satisfyingly diverse. Its setting offers mystery but also provides explanations for how romance evolves and how Therese's quest for justice becomes entangled in this process....Soon Therese finds that her destiny and her choices are being assessed by the gods and controlled by oaths and alliances far beyond her understanding. In the midst of all this a love grows up between a mortal and a god: a love that might offer no easy paths.

In this teen fantasy novel and love story, an orphaned girl finds herself at the center of a war brewing among the gods of Olympus.

. . . . Pohler's description of [Therese's parents'] deaths is gruesomely clear and heartbreaking. . . . . After this fast and eventful introduction . . . The entire pantheon of Greek gods picks sides, and, in an arena battle sure to thrill Hunger Games fans, Therese shows her mettle. The outcome neatly tees things up for the three books (at least) in the series still to come. --Kirkus Reviews

Book Description Condition: Good. The item shows wear from consistent use, but it remains in good condition and works perfectly. All pages and cover are intact (including the dust cover, if applicable). Spine may show signs of wear. Pages may include limited notes and highlighting. May NOT include discs, access code or other supplemental materials. Seller Inventory # 31UIGP001TUS_ns

Book Description Condition: Good. Condition Good: Comment: Book is used and in good condition with some wear from use. This may include wear to dustcover/missing dustcover, inside cover, spine, some highlighting or writing in book, slight curled corners, stains, and wear to the fore edge. All orders ship via FedEx SmartPost. (Please note shipments to Hawaii and Puerto Rico Can take up to 30 days.) Thank you for shopping with Goodwill Industries of the Inland Northwest - changing lives through the cycle for good. Seller Inventory # 4J2HM00014DI

Book Description Green Press, 2012. Condition: Good. A+ Customer service! Satisfaction Guaranteed! Book is in Used-Good condition. Pages and cover are clean and intact. Used items may not include supplementary materials such as CDs or access codes. May show signs of minor shelf wear and contain limited notes and highlighting. Seller Inventory # 061568596X-2-4

Book Description Green Press, 2012. Paperback. Condition: Good. Connecting readers with great books since 1972. Used books may not include companion materials, some shelf wear, may contain highlighting/notes, may not include cdrom or access codes. Customer service is our top priority!. Seller Inventory # S_277454789

Book Description -. Paperback. Condition: Very Good. The Gatekeeper's Sons: Gatekeeper's Trilogy, Book One: Volume 1 This book is in very good condition and will be shipped within 24 hours of ordering. The cover may have some limited signs of wear but the pages are clean, intact and the spine remains undamaged. This book has clearly been well maintained and looked after thus far. Money back guarantee if you are not satisfied. See all our books here, order more than 1 book and get discounted shipping. Seller Inventory # 7719-9780615685960

Book Description Paperback. Condition: Very Good. The book has been read, but is in excellent condition. Pages are intact and not marred by notes or highlighting. The spine remains undamaged. Seller Inventory # GOR007631491

Shipping: US$ 11.02
From United Kingdom to U.S.A.
Destination, rates & speeds