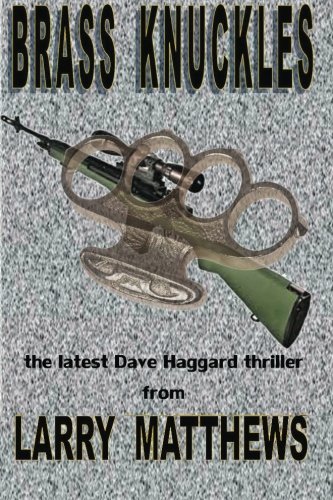 Haggard is back! This time he's chasing a story of assassination, greed, and an out of control hired killer.A federal judge is shot down outside the courthouse in Washington. A member of Congress is being investigated for skimming Oak Ridge cleanup money. A professional assassin, a former army sniper, is on the loose. Brass Knuckles takes you inside the world of investigative reporting in Washington, where journalists and their sources feed off each other. Dave Haggard, ace reporter for Now News, is again in the center of a dangerous search for the truth about murder, millions of dollars skimmed from the federal government by a powerful subcommittee chairman, and the madness of one man. The search for the truth runs through the F.B.I., the Justice Department, the office of a high powered defense attorney, Capitol Hill, and the beautiful mountains of East Tennessee, to its shattering conclusion. Reviewers of the Dave Haggard Thrillers say: "...a taut, mystery thriller that will stretch your nerves to the breaking point." Austin Camacho, author of the Hannibal Jones Mysteries. Amazon reviewers say: "It was a roller coaster ride from beginning to end." "This is one of those books that sucks you in and holds you captive until it's over."

Larry Matthews is an award-winning broadcast journalist whose thirty-plus years as a reporter provide the background material for his books. Matthews was a street reporter, anchor, news director, producer and editor for major radio stations, ABC Radio, and National Public Radio. He was a producer, host and reporter for Maryland Public Television. As a reporter he covered some of the major events of the late Twentieth Century in Washington, D.C. and other cities. He is the recipient of the George Foster Peabody Award for Excellence in Broadcasting, The DuPont/Columbia Citation, The National Headliner Award, and national and regional awards from The Society of Professional Journalists, The Associated Press, United Press International, and other professional organizations and universities. His memoir, I Used To Be In Radio, was hailed as “a must-read in journalism schools, especially for those who aspire to be investigative reporters” and as “a funny and moving page-turner”. Two of his novels, Healing Charles and Saving Charles, were praised as “outstanding works of fiction.” The novels are about the life of one man, set thirty years apart. Matthews is also co-author of Street Business, with Ernie Lijoi Sr., a police/crime novel based on real events in the career of retired Detective Lijoi. Matthews’s experience as an investigative reporter provides much of the background material for his Dave Haggard thriller series about a radio reporter in Washington, D.C. who finds himself at the dangerous center of major criminal investigations. The first in the series, Butterfly Knife, involves the hunt for a serial killer of priests. The second, Brass Knuckles, finds Dave chasing down leads in a murder/kickback scheme involving a member of Congress. The third, Detonator, is about the betrayal of national trust and high-level treason. Matthews lives and writes in Gaithersburg, Maryland. His website is www.larrymatthews.net. Twitter @lawrencematthew Facebook is larrymatthewsauthor