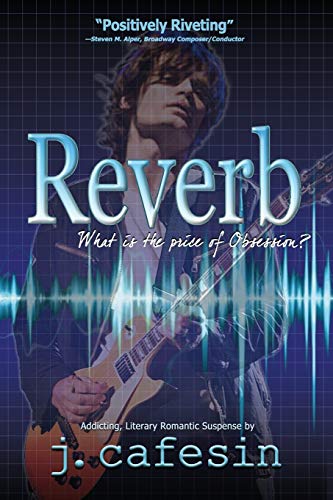 James Micheal Whren is brilliant, beautiful, rich, and taken—with his genius for creating music. He's desired by many, yet commits to no one but his muse. Just twenty-eight, and at the pinnacle of his career, on the eve of his brother's funeral his father shatters his life, and James is left abandoned in hell with no one real to save him. His odyssey to freedom takes him beyond the looking glass, to the reflection of friends and lovers. Humbled and alone, James escapes to the Greek island of Corfu. But instead of finding solace there, loneliness almost consumes him. Until Elisabeth, and her son, Cameron. Reverb is a love story, a psychological thriller paced with romantic suspense. The story chronicles intricately woven characters fraught with frailties that possess us all, and that linger long after the read. It is a tale of redemption—the evolution of a modern man from solipsist to integrated awareness, and the journey that inadvertently awakens his capacity to love. Spun from The Magus, also about a man who learns to love someone other than himself, and way beyond 50 Shades of Gray, Reverb is told like Crime and Punishment--modern, clean, edgy verging on sharp. Like nothing you've read, guaranteed...

J. Cafesin is an L.A. native, born and raised on the Valley side of the Hollywood Hills, among the TV and movie studios. Creativity abound and inspired growing up with the kids of producers, directors and screenwriters living in the quiet suburb.  Journals were kept under the bed or close at hand to scribble prose, lyrics, or manic rants, but art and illustration were the focus during the early years. A BA in Advertising Design, and three years as an Art Director in corporate servitude pushed her from the proverbial window and into freelance as a floater for CBS, NBC, and movie studios from Transworld Entertainment to Lucas Films Ltd. Attending UCLA film school at night, she finished her first screenplay before quitting their program to escape the wild and crazy Hollywood scene, and moved to the San Francisco area to focus on corporate and literary writing. Now a freelance writer of fiction, essay and copy in the Bay Area, J. Cafesin is currently working on her second contemporary romance; a YA series of short fables; and adapting her Sci-Fi screenplay into a third novel. Her articles are featured regularly in local and national print publications. Essays on her ongoing blogspot have been translated into multiple languages and distributed globally: jcafesin.blogspot.com J. Cafesin resides on the eastern slope of the redwood laden Oakland Hills with her husband/best friend, two gorgeous, talented, spectacular kids, and a bratty but cute pound-hound Shepherd-mix.

James Whren is brilliant, beautiful and taken--with himself, or more precisely his genius for creating music.On the eve of his brother's funeral, his father turns his life upside down, and James is left abandoned in hell with no one, not even his muse to save him.His odyssey to freedom takes him beyond the looking glass, to the view from friends and lovers, shattering his already battered self-image.Humbled, afraid and alone, James escapes to the Greek island of Corfu. But instead of solace, loneliness almost consumes him.Until Elisabeth and her son Cameron.Reverb is a love story, a psychological thriller paced with romantic suspense, and chronicles the evolution of a modern man, from solipsist to integrated awareness, and the bizarre journey that led him to his awakening. Reverb satisfies women's deepest desire-- for men to be more emotionally available, and more connected outside of themselves.