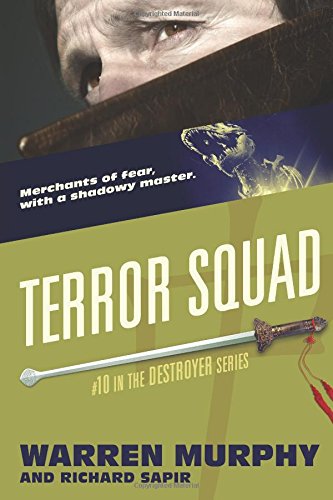 Skyjackings are suddenly on the rise. Terrorist groups seem to be coming out of the woodwork, armed with surprisingly strong tactics, total self-confidence, and an unshakable commitment to whatever anti-establishment credo-of-the-week they've bought into. Someone must be training them. Someone must be encouraging and supporting them. One man must be stopping them.
ABOUT THE SERIES: Sentenced to death for a crime he didn't commit, ex-cop Remo Williams is rescued from the electric chair and recruited by a secret government organization as an assassin, targeting criminals who are beyond the law. Remo's trainer is a curmudgeonly old Korean named Chiun, whose mastery of the terrifyingly powerful martial art of Sinanju makes him the deadliest man alive.

The winning combination of action, humor, and mysticism has made the Destroyer one of the best-selling series of all time. With more than 150 books and over 50 million copies sold worldwide, the Destroyer has been praised by the LA Times as "flights of hilarious satire," and gave birth to the mythology of the brash young Westerner taught by an ancient, inscrutable master.

WARREN MURPHY was born in Jersey City, where he worked in journalism and politics until launching the Destroyer series with Richard Sapir in 1971. A screenwriter (Lethal Weapon II, The Eiger Sanction) as well as a novelist, Murphy’s work has won a dozen national awards, including multiple Edgars and Shamuses. He has lectured at many colleges and universities, and is currently offering writing lessons at his website, WarrenMurphy.com. A Korean War veteran, some of Murphy’s hobbies include golf, mathematics, opera, and investing. He has served on the board of the Mystery Writers of America, and has been a member of the Screenwriters Guild, the Private Eye Writers of America, the International Association of Crime Writers, and the American Crime Writers League. He has five children: Deirdre, Megan, Brian, Ardath, and Devin.

RICHARD BEN SAPIR was a New York native who worked as an editor and in public relations before creating The Destroyer series with Warren Murphy. Before his untimely death in 1987, Sapir had also penned a number of thriller and historical mainstream novels, best known of which were The Far Arena, Quest, and The Body, the last of which was made into a film. The book review section of the New York Times called him “a brilliant professional.”

Book Description Destroyer Books, 2013. Paperback. Condition: GOOD. Has little wear to the cover and pages. Contains some markings such as highlighting and writing. Seller Inventory # 0615786979_abe_gd

Book Description Destroyer Books, 2013. Condition: Good. A+ Customer service! Satisfaction Guaranteed! Book is in Used-Good condition. Pages and cover are clean and intact. Used items may not include supplementary materials such as CDs or access codes. May show signs of minor shelf wear and contain limited notes and highlighting. Seller Inventory # 0615786979-2-4