Items related to Created to Die (Children of Eden) (Volume 2) 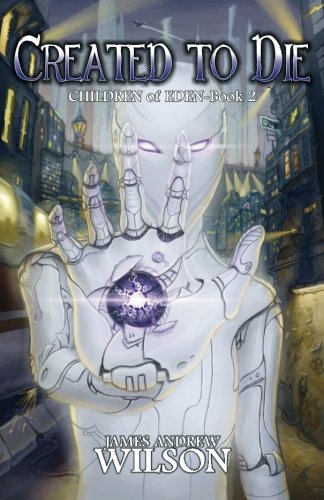 A THRILLING NEW SERIES FOR FANS OF DYSTOPIAN SCIENCE FICTION

CREATED TO DIE: Book Two of the CHILDREN OF EDEN

She was created to die.

The world outside of the Eden facility is a dangerous place. I have been rescued by a group of people who claim to be on my side, but I don’t know if I can trust them. I need their help, though, to save Ruth.

I am a wanted robot. There is a large bounty on my head, and many people who will stop at nothing to capture me, to destroy me.

Before it’s too late.

THE CHILDREN OF EDEN

Short stories in the CHILDREN OF EDEN Universe

James Andrew Wilson was inspired by the wonder of good storytelling from a young age and started writing his first novel when he was sixteen. He married at seventeen, became a father at twenty-one, and lives now in the Pacific Northwest with his wife and their three boys. James enjoys hiking, Italian food, board games, and celebrating the joys of a simple life. When he grows up, he hopes to be a respectable hobbit and not have any more adventures, thank you very much.

Book Description Paperback. Condition: Very Good. The book has been read, but is in excellent condition. Pages are intact and not marred by notes or highlighting. The spine remains undamaged. Seller Inventory # GOR010180625

Book Description Two Crowns Press, 2013. Condition: Good. A+ Customer service! Satisfaction Guaranteed! Book is in Used-Good condition. Pages and cover are clean and intact. Used items may not include supplementary materials such as CDs or access codes. May show signs of minor shelf wear and contain limited notes and highlighting. Seller Inventory # 0615833551-2-4