Items related to Some Fun Tonight!: The Backstage Story of How the Beatles...

Gunderson, Chuck Some Fun Tonight!: The Backstage Story of How the Beatles Rocked America: the Historic Tours of 1964-1966

Some Fun Tonight!: The Backstage Story of How the Beatles Rocked America: the Historic Tours of 1964-1966 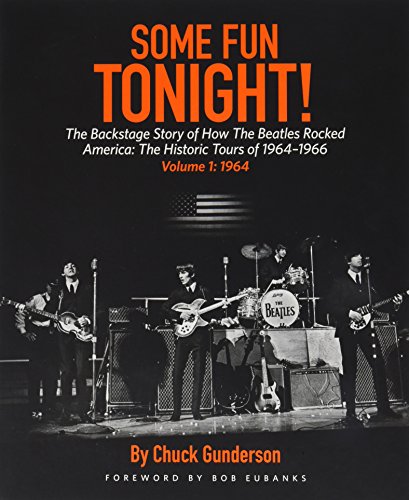 (Book). The Beatles' North American tours turned the entertainment business on its ear and forever changed the landscape of the concert touring industry. In February 1964, after finally achieving a number-one hit in America, the Fab Four came to the country with high hopes, performing on the wildly popular Ed Sullivan Show in both New York City and Miami and playing concerts at Carnegie Hall and the Washington Coliseum. In just fifteen short days, the Beatles conquered America. The Beatles made music-entertainment history with their North American tours from 1964 to 1966. Some Fun Tonight! The Backstage Story of How the Beatles Rocked America: The Historic Tours of 1964-1966 is a comprehensive two-volume set which gives you a city-by-city synopsis of the group's activities as they traveled the United States and Canada for their groundbreaking series of concerts. From San Francisco's Cow Palace show on August 19, 1964, through their last-ever live performances at that city's famed Candlestick Park on August 29, 1966, these books cover the music and the madness that characterized the Beatles' three North American tours. With hundreds of photographs and images of rare memorabilia, it is truly the definitive reference for what is arguably the most important period in the Beatles' long and winding career. You'll read about the behind-the-scenes negotiations, the mayhem at the airports and hotels, and the cheeky quotes delivered at the press conferences. You'll also read about the opening acts, the concerts, and the stories behind the shows through the eyes of the Beatles, their entourage, the promoters, the emcees, and the fans. Never before have the Beatles' North American concerts been covered in such depth. If you witnessed the mania firsthand, you'll relive the excitement in the pages of these books. If you were born too late to be a part of those halcyon days, you'll learn what it was like to be swept up and carried away by the phenomenon of the greatest musical act of all time. When all is said and done, Some Fun Tonight is a tribute to the fans the first generation and beyond. Look carefully at the faces of the fans in this book; they may be your friends, parents, grandparents or even you! but together, they made Beatlemania happen. Fasten your seat belt and enjoy this comprehensive history!

CHUCK GUNDERSON (Washington, Utah) was raised in San Diego, California, the site of the Beatles eighth stop on the 1965 North American tour. He was too young to attend the show, but he fondly recalls his older siblings spinning the records of the Fab Four as he grew up, which perked a life-long love for the band. He has worked in the outdoor advertising industry most of his life, although his true passion is history. He holds two degrees in history a BA from San Diego State University and an MA from the University of San Diego. Having published a few articles over the years, Chuck turned his sights to researching and writing this epic two-volume set on the history of the Beatles North American tours of 1964 to 1966. Chuck is married to Christina, and they are the parents of four children, each a self-described Beatles fan.

Rapid-fire sets, performances that could scarcely be heard over the roar of screaming audiences, and escape routes planned well in advance. First-time author Gunderson here presents an exhaustive chronicle of the Beatles North American tours from 1964 to 1966. The volumes are divided by year, with several pages devoted to each stop. Gunderson describes the venues and shows, summarizes press conferences (complete with witty quips), and relates stories of fervent fans. A longtime collector of concert memorabilia, the author is a true Beatles lover, covering everything from the quartet s meals to their expenses and ticket sales. [I]t's the design and the visuals that are the main draw. A browser's delight, these oversize volumes feature nostalgia-inducing photographs of the Fab Four and their adoring followers, as well as reproductions of contracts, insurance policies, posters, and ticket stubs. Also included are profiles of groups that toured with the group, such as the Ronettes, the Righteous Brothers, and the Exciters. --Library Journal XPress Reviews

1. Some Fun Tonight!: The Backstage Story of How the Beatles Rocked America: the Historic Tours of 1964-1966