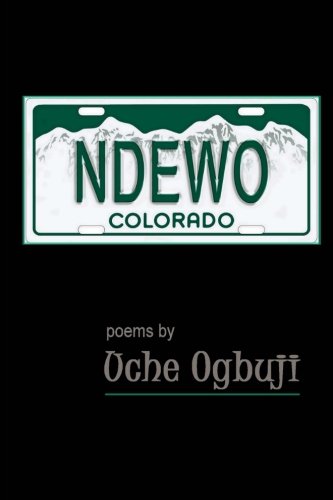 This book is a finalist for the 2014 Colorado Book Awards.
Ndewo is Igbo for "Hello." The author of this collection of poems, Uche Ogbuji, is Igbo by patrilineage, born in Nigeria right after the civil war over the Republic of Biafra's secession. His parents emigrated, having been on the losing side, and invested him with wanderlust through their travels across Europe and North America, and then back to Nigeria. Ogbuji followed this traveler's habit until he arrived in Colorado, inspiration of "America the Beautiful," and found himself finally settled. A longtime writer, he eventually discovered the vibrant literary communities in the region, whose companionship encouraged his verse greetings for adopted home. The variety of forms and moods in these poems reflect the Centennial state's diversity of terrain, weather, and culture. Ndewo, Colorado!
One color: red
El Dorado road
Wooded on Lorca
Coo! Wonder lode!
Old crow order
Rococo carol
Local wonder
Crooned creole.
End road, Narco
Odd condor crown
O lord, leader
Oracle down!
Roll on Radon
Landlord ordeal.
Dew-drowned orca
All-worded real.
New corneal load,
Dawn Colorado,
Cocoa colored one
Roll call: "Ndewo!"

Uche Ogbuji, born in Calabar, Nigeria, had lived, among other places, in Egypt and England, but never anywhere longer than 3 years in his life until he came to Colorado. Here he was instantly smitten by the mountain landscape and cultural flavor and has now settled near Boulder with his wife and four children. Educated mostly in Nigeria, Uche is a computer engineer and entrepreneur whose abiding passion is poetry. His poems, fusing Igbo culture, European Classicism, U.S. Mountain West setting, and Hip-Hop influences, have appeared widely in journals and anthologies. He is editor at Kin Poetry Journal and The Nervous breakdown, founder and curator at the @ColoradoPoetry Twitter project. Uche also snowboards, coaches and plays soccer, and trains in American Kenpo Karate.