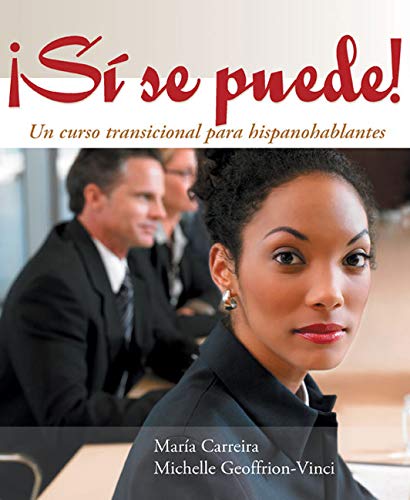 Si se puede! is designed for students who have had some exposure to Spanish, either at home or in their community. While these students may have a higher degree of communicative proficiency than those whose first and primary contact with Spanish occurs in the classroom, they sometimes lack critical exposure to and training in Spanish morphology, syntax, and grammatical structures. Developed specifically to address language learning for heritage speakers, Si se puede! provides such training through a variety of activities that focus on the further development of speaking, reading, and writing skills. In addition, the text's thematic content helps students attain a greater awareness of the history, character, and vital importance of the multi-faceted Hispanic communities that form such a substantial part of U.S. and world identities. Material has been carefully developed with the understanding that college-level heritage speakers in the United States have acquired critical thinking, reading, and writing skills in English that can transition effectively to Spanish.

Maria Carreira is Associate Professor of Spanish at California State University, Long Beach. She holds a Ph.D. in linguistics from the University of Illinois, Champaign. Carreira has written linguistic notes, profiles of well-known Hispanics, and heritage learner annotations. She is active in issues relating to heritage learners.

Michelle Geoffrion-Vinci is an associate professor of Spanish at Lafayette College, Easton, Pennsylvania. A graduate of Wellesley College (A.B.) and Stanford University (M.A., Ph.D.), Geoffrion-Vinci specializes in contemporary literature of Spain, applied linguistics, and language-teaching methodologies. Having designed and taught a number of courses for heritage speakers of Spanish, one of her first publications was co-authored with Guadalupe Valdes on the topic of the development of linguistic register in college-age Spanish bilinguals. Her other research interests include contemporary poetry and Spanish women writers from the nineteenth century to the present. In her most recent publications, she interrogates issues of gender in works by Spanish authors such as Cristina Fernández Cubas (1945- ). She has also published numerous studies on Rosalia de Castro including Between the Maternal Aegis and the Abyss: Woman as Symbol in the Poetry of Rosalia de Castro (Madison, NJ: Fairleigh Dickinson UP, 2002). At Lafayette, Geoffrion-Vinci teaches courses on Spanish language, Peninsular literature and civilization from the eighteenth century to the present and on women writers of Spain and Latin America. She taught Lafayette's first course for native speakers and is a founding advisor to the College's Hispanic Society. She resides with her family in Easton, PA.