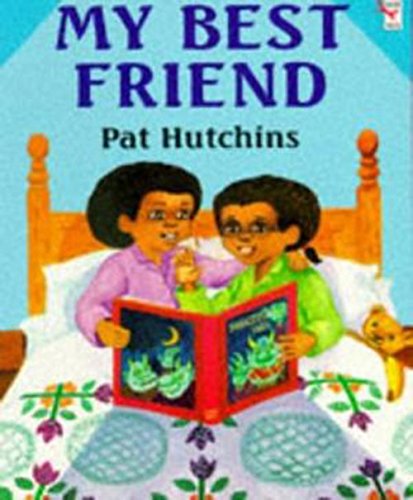 A little girl eagerly welcomes her best friend to spend the night. She is glad to have a friend who can run faster, climb higher, and jump farther than anyone else. But when the lights are turned out and the visitor is afraid, the little girl proves what best friends are for. "once again Hutchins captures the simple elements of a child's life in a heartwarming story, steeped in truth....A must."--Booklist.

Pat Hutchins, one of seven children, was born in Yorkshire, England, and grew up in the surrounding countryside, which she still loves. At a very early age she knew that she wanted to be an artist and was encouraged by an elderly couple who would give her a chocolate bar for each picture she drew. A local art school offered her a scholarship and she studied there for three years, continuing her training at Leeds College of Art, where she specialized in illustration. Her career in the children's book field began with the highly acclaimed Rosie's Walk, a 1968 ALA Notable Book. Since then she has written five novels and created more than twenty-five picture books. She was awarded England's prestigious Kate Greenaway Medal in 1974 for The Wind Blew. Pat Hutchins lives with her husband in London, England.

PreSchool-Grade 1-- What qualities make for a best friend? To the narrator of this book, they include knowing how to run, climb, and jump better than anybody else. The ability to eat spaghetti without dropping any on the table also helps. The two little girls appear to be about the same age, but their skill levels are quite different. One knows how to paint neatly, untie her shoelaces, and button her pajamas; the other does not. When the night wind blows the curtains, however, it is the less accomplished child who has the common sense and bravery to deal with the situation. The story is heartfelt and reassuring, and the friends gaze at one another with true affection and admiration. Hutchins's artistic skill is reflected in the juxtaposition of background scenes reflecting tidiness and chaos, but her depictions of the black children with their huge claylike heads and buck teeth are exaggerated and lifeless. --Anna DeWind, Milwaukee Public Library
Copyright 1993 Reed Business Information, Inc.

Book Description HOUGHTON MIFFLIN. Paperback. Condition: GOOD. Spine creases, wear to binding and pages from reading. May contain limited notes, underlining or highlighting that does affect the text. Possible ex library copy, will have the markings and stickers associated from the library. Accessories such as CD, codes, toys, may not be included. Seller Inventory # 3322245202