Items related to The Firekeeper's Son 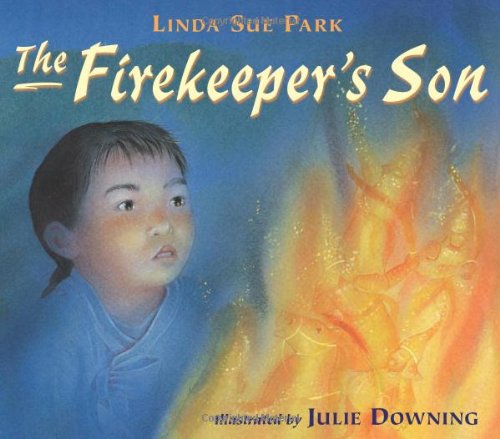 In Korea in the early 1800s, news from the countryside reached the king by means of signal fires. On one mountaintop after another, a fire was lit when all was well. If the king did not see a fire, that meant trouble, and he would send out his army. Linda Sue Park's first picture book for Clarion is about Sang-hee, son of the village firekeeper. When his father is unable to light the fire one night, young Sang-hee must take his place. Sang-hee knows how important it is for the fire to be lit-but he wishes that he could see soldiers . . . just once.
Mountains, firelight and shadow, and Sunhee's struggle with a hard choice are rendered in radiant paintings, which tell their own story of a turning point in a child's life. Afterword.

Linda Sue Park is the author of bestseller A Long Walk to Water as well as the Newbery Medal book A Single Shard and many other acclaimed novels and picture books. She lives in Rochester, NY. www.lspark.com,Twitter: @LindaSuePark.

Julie Downing has written and/or illustrated over 30 picture books. For Clarion, she has illustrated The Firekeeper’s Son by Linda Sue Park, among others. Her books have received a Parents’ Choice Award and a New York Public Library Best Books Award. She lives in San Francisco, California. For more information visit www.juliedowning.com. From School Library Journal:

PreSchool-Grade 3-Park's command of place, characterization, and language is as capable and compelling in this picture book as it is in her novels. Set in 19th-century Korea, this story centers around an actual bonfire signal system. Every night, when Sang-hee's father sees that the ocean is clear of enemies, he climbs the mountain to light his fire, setting in motion a chain reaction of blazes that eventually reaches the peak closest to the palace and assures the king that all is well in the land. When Father breaks his ankle, his son must ascend alone into the darkness with a bucket of burning coals. During a dramatic pause, he contemplates the consequences of inaction and his secret desire to see the king's soldiers. Lyrical prose and deftly realized watercolors and pastels conjure up the troops in a vision linked to the glowing coal clasped in the boy's tongs. In the next scene, a close-up of the last coal illuminates Sang-hee's eyes, his face a study of concentration. Upon the child's descent, his father shares the memory of his own youthful desires and his pride in his son's accomplishment. A sense of inherited mission pervades the conclusion as Sang-hee learns that he, too, is "part of the king's guard." Children will be intrigued by this early form of wireless communication, caught up in the riveting dilemma, and satisfied by the resolution.
Wendy Lukehart, Washington DC Public Library
Copyright © Reed Business Information, a division of Reed Elsevier Inc. All rights reserved.