Items related to The Complete Adventures of Curious George, Anniversary... 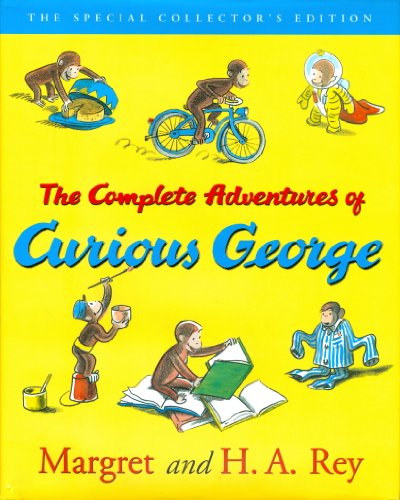 A collection of delightful escapades starring the beloved mischievous and heroic little monkey features an introduction by critic Leonard Marcus and a fascinating history of the authors. 75,000 first printing.

Sixty years have passed since a curious little chimp in Africa met the man with the big yellow hat and got into the first of many scrapes. Decades later, George is as curious--and naughty--as ever. To celebrate the 60th anniversary of Curious George's debut, this special edition is a collection of seven classic adventures by Margret and H.A. Rey, along with an introduction by critic Leonard Marcus, a retrospective note by publisher Anita Silvey, a history of the Reys by Dee Jones, curator of the de Grummond Children's Literature Collection, and a photo album. The many generations of fans of the "good little monkey who was always very curious" will be fascinated to learn how H.A. and Margret escaped on bicycle from German-occupied Paris, with just their winter coats and several picture books (including a draft of Curious George, then called Fifi) strapped to the racks. Photos and essays reveal H.A. to have been a gentle, humorous man, while Margret, by all accounts, was spirited and brutally direct, with a keen business mind. The chemistry between them worked beautifully. Between them, they created one of the most beloved characters in children's literature. This handsome volume includes Curious George, Curious George Takes a Job, Curious George Rides a Bike, Curious George Gets a Medal, Curious George Flies a Kite, Curious George Learns the Alphabet, and Curious George Goes to the Hospital. (Ages 4 to 8) --Emilie Coulter

Hans Augusto Rey was born in Hamburg, Germany in 1898. As a child, he spent much of his free time in that city's famous Hagenbeck Zoo drawing animals. After serving in the army during World War I, he studied philology and natural science at the University of Hamburg. He then married Margret Rey and they moved to Montmartre for four years. The manuscript for the first Curious George books was one of the few items the Reys carried with them on their bicycles when they escaped from Paris in 1940. Eventually, they made their way to the United States, and Curious George was published in 1941. Curious George has been published in many languages, including French, German, Japanese, Afrikaans, and Norwegian. Additional Curious George books followed, as well as such other favorites as CECILY G. AND THE NINE MONKEYS and FIND THE CONSTELLATIONS.