Items related to The New Dictionary of Cultural Literacy: What Every...

The New Dictionary of Cultural Literacy: What Every American Needs to Know 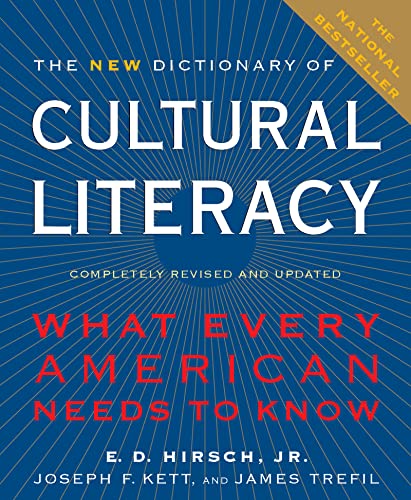 In this fast-paced information age, how can Americans know what's really important and what's just a passing fashion? Now more than ever, we need a source that concisely sums up the knowledge that matters to Americans -- the people, places, ideas, and events that shape our cultural conversation. With more than six thousand entries,The New Dictionary of Cultural Literacy is that invaluable source.
Wireless technology. Gene therapy. NAFTA. In addition to the thousands of terms described in the original Dictionary of Cultural Literacy, here are more than five hundred new entries to bring Americans' bank of essential knowledge up to date. The original entries have been fully revised to reflect recent changes in world history and politics, American literature, and, especially, science and technology. Cultural icons that have stood the test of time (Odysseus, Leaves of Grass, Cleopatra, the Taj Mahal, D-Day) appear alongside entries on such varied concerns as cryptography, the digital divide, the European Union, Kwanzaa, pheromones, SPAM, Type A and Type B personalities, Web browsers, and much, much more.
As our world becomes more global and interconnected, it grows smaller through the terms and touchstones that unite us. As E. D. Hirsch writes in the preface, "Community is built up of shared knowledge and values -- the same shared knowledge that is taken for granted when we read a book or newspaper, and that is also taken for granted as part of the fabric that connects us to one another." A delicious concoction of information for anyone who wants to be in the know, The New Dictionary of Cultural Literacy brilliantly confirms once again that it is "an excellent piece of work . . . stimulating and enlightening" (New York Times) -- the most definitive and comprehensive family sourcebook of its kind.

James Trefil, the Clarence J. Robinson Professor of Physics at George Mason University, is the author or coauthor of more than thirty books, including The New Dictionary of Cultural Literacy.

E.D. Hirsch, Jr. is the Linden Kent Memorial Professor of English at the University of Virginia, Charlottesville, and the author of Cultural Literacy, The First Dictionary of Cultural Literacy, and The Core Knowledge Series. Dr. Hirsch is a fellow of the American Academy of Arts and Sciences, and has been a senior fellow of the National Endowment for the Humanities. He is president of the Core Knowledge Foundation, a nonprofit organization devoted to educational reform.

There is something in the contemplation of the mode in which America has
been settled that, in a noble breast, should forever extinguish the prejudices
of national dislikes. Settled by the people of all nations, all nations may claim
her for their own. You can not spill a drop of American blood without spilling
the blood of the whole world. . . . We are not a narrow tribe of men — No: our
blood is as the flood of the Amazon, made up of a thousand noble currents
all pouring into one. . . . For who were our father and mother? Or can we
point to any Romulus and Remus for our founders? Our ancestry is lost in
the universal paternity, and Caesar and Alfred, St. Paul and Luther, Homer
and Shakespeare are as much ours as Washington, who is as much the
world"s as our own.

You might want to read the rest of this wonderful passage (Chapter 33) from
Redburn, written in 1849. I won"t quote any more of it here. Suffice it to say
that this American idea of a new kind of patriotism and community is a
tradition that stretches from George Washington to Horace Mann and
Herman Melville to ourselves, and it has not lost its pungency and capacity
to inspire.

There are two reasons to pursue scientific knowledge: for the sake of the
knowledge itself, and for the practical uses of that knowledge. Because this
second aspect of science affects the lives of most people, it is more familiar
than the first. Knowledge must be gained, however, before it can be applied,
and often the most important technological advances arise from research
pursued for its own sake.
Traditionally, new technology has been concerned with the
construction of machines, structures, and tools on a relatively large scale.
The development of materials for building bridges or skyscrapers is an
example of this, as is the development of the internal-combustion engine and
the nuclear reactor. While such activities involve all the sciences, from
chemistry to nuclear physics, the overriding goal has been the same: to
improve the human condition by finding better ways to deal with the
macroscopic world.
Since World War II, the focus of technological activity has
undergone a major change. While the old activities are still pursued, they
have been largely superseded by applications of technology at the
microscopic level. Instead of building large-scale structures and machines,
modern technology tends to concentrate on finding improved ways to transfer
information and to develop new materials by studying the way atoms come
together. The silicon chip and microelectronics typify this new technological
trend, as does the blossoming of genetic engineering. The advent of the
Internet is just one familiar consequence of this new trend, which can be
expected to continue into the foreseeable future.
The dividing line between what we include in the following list as
technology and what we call science elsewhere in this volume is somewhat
arbitrary. In general, what we have done is this: if a term is essential to
understanding a particular branch of science, it appears in the list for that
science. Thus, atom appears with the physical sciences, even though an
understanding of atoms is clearly important to the new technology. If,
however, the term involves something that is likely to affect an individual"s life,
even though it is not a central concept of a particular branch of science, it is
listed under "Technology."

— J. T.
alternating current (AC) An electric current in which the flow reverses
periodically. (Compare direct current (DC).)
* In the United States, most household current is AC, going through sixty
reversal cycles each second. Electric motors in household appliances are
designed to work with current at this rate of reversal.

amp (ampere) (am-peer) A unit of electric current. One ampere corresponds
to a certain number of electrons passing a fixed point each second.
* A typical household"s electrical supply includes a total of 120 to 200 amps;
a typical house circuit carries 15 to 50 amps.

amplifier In electronics, a device that takes a small electric signal and
converts it into a large one. Amplifiers are used in stereo systems, electric
guitars, and loudspeakers.

amplitude modulation (AM) A type of radio signal in which the amplitude, or
strength, of a radio wave is varied in order to carry information from a
transmitter to a receiver. (Compare frequency modulation (FM).)

analog signal (an-uh-lawg, an-uh-log) A signal in which some feature
increases and decreases in the same way as the thing being transmitted. In
am radio, for example, the strength of the radio wave goes up and down in
analogy with the loudness of the original sound. (Contrast digital signal.)

Apollo program A series of space flights undertaken by the United States
with a goal of landing a man on the moon. Each Apollo flight carried a crew of
three astronauts. The first lunar landing by humans was achieved by Apollo
11 on July 20, 1969. Five other successful lunar landings followed. The Apollo
program ended in 1974. It was named after the Greek god of learning, Apollo.
*Neil Armstrong was the first man to set foot on the moon.

Arpanet An acronym for Advanced Research Project Agency Network. An
early communications network developed by the Department of Defense in
the late 1960s. It connected high-tech research institutions and the military.
* Creating a communications system that could survive a nuclear war was a
major impetus behind the development of this system. * Arpanet is often
spoken of as a precursor of the Internet.

artificial intelligence (AI) The means of duplicating or imitating intelligence in
computers, robots, or other devices, which allows them to solve problems,
discriminate among objects, and respond to voice commands.

ASCII An acronym for American Standard Code for Information Interchange.
Computers use this code to standardize communication between different
machines.

astronaut A crew member of a space mission launched by the United States.
(See Apollo program and Mercury program.)

ATM An abbreviation for automated teller machine. This is a computer
terminal that takes the place of a human bank teller and allows the user to
access basic bank services, such as making deposits and cash withdrawals
from remote locations, twenty-four hours a day.

atomic bomb A bomb that is powered by nuclear fission, and therefore
produces a quick release of energy and great destruction.

backbone The primary line(s) that connects the slower, shorter cable portions
of a communications network together. (See last mile.) In larger networks,
such as the Internet, a backbone consists of high-capacity, high-speed lines
that can extend over great distances.

bandwidth The amount of data that can be carried by a digital communication
medium, often expressed in hertz.
* Within the radio and microwave portions of the electromagnetic spectrum
limited bandwidth is available, and in the United States the use of the
spectrum is regulated and allocated by the FCC. (See VHF and UHF.)

bar code A series of parallel lines that can be read by an optical scanner and
decoded by a computer into usable information. The ten-line Universal
Product Code (UPC) on the packaging of retail items is an example of this.
The key to this code is the variation in line thickness and separation.

bathyscaph (bath-i-skaf) A deep-sea research vessel that carries a crew and
is free to maneuver independently.

battery A device that produces an electric current by harnessing the
chemical reactions that take place within its cells.

Bell, Alexander Graham An American inventor and scientist of the late
nineteenth and early twentieth centuries, born in Scotland. He invented the
telephone in 1876. Much of Bell"s career was devoted to education of the deaf
and to production of electronic devices to help them hear better.

binary (beye-nuh-ree, beye-ner-ee) Anything composed of two parts. In
modern computers, information is stored in banks of components that act
like switches. Since switches can be either on or o., they have a binary
character, and we say that the computer uses "binary arithmetic" to do its
work.

biological warfare The use of biological agents as weapons in warfare. Also
called germ warfare.

biometrics The measuring and analysis of such physical attributes as facial
features and voice or retinal scans. This technology can be used to ...

1. The New Dictionary of Cultural Literacy: What Every American Needs to Know

2. New Dictionary of Cultural Literacy : What Every American Needs to Know

3. The New Dictionary of Cultural Literacy (Hardback or Cased Book)

4. The New Dictionary of Cultural Literacy: What Every American Needs to Know

5. The New Dictionary of Cultural Literacy: What Every American Needs to Know

Book Description Hardcover. Condition: New. 3rd. Hardcover. In this fast-paced information age, how can Americans know what's really important and what's just a passing fashion? Now more than ever, we need a source that concisely sums up .Shipping may be from multiple locations in the US or from the UK, depending on stock availability. 672 pages. 1.606. Seller Inventory # 9780618226474

7. The New Dictionary of Cultural Literacy: What Every American Needs to Know

8. The New Dictionary of Cultural Literacy: What Every American Needs to Know

9. The New Dictionary of Cultural Literacy: What Every American Needs to Know

10. The New Dictionary of Cultural Literacy: What Every American Needs to Know