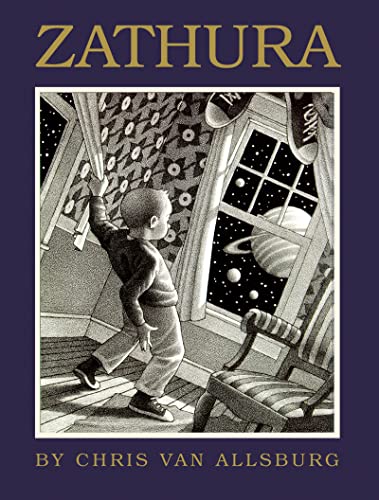 On the last page of the Caldecott-winning book Jumanji, young Danny Budwing is seen running after his brother, Walter, with a game tucked under his arm. Now after twenty years, Chris Van Allsburg is ready to reveal what happens when Danny and Walter roll the dice. This time the name of the game is Zathura and the battling Budwing boys are in for the ride of their lives.

Zathura unleashes intergalactic challenges that require even the quarreling Budwing brothers to work as a team.

Chris Van Allsburg is the winner of two Caldecott Medals, for Jumanji and The Polar Express, as well as the recipient of a Caldecott Honor Book for The Garden of Abdul Gasazi. The author and illustrator of numerous picture books for children, he has also been awarded the Regina Medal for lifetime achievement in children’s literature. In 1982, Jumanji was nominated for a National Book Award and in 1996, it was made into a popular feature film. Chris Van Allsburg is a former instructor at the Rhode Island School of Design. Visit him at chrisvanallsburg.com.

Twenty years after Jumanji (1981), Van Allsburg picks up where he left off, with Danny and Walter Budwing discovering an oblong box in the park. Walter dismisses the box as "just some dumb old game," but his curious younger brother takes it home anyway. While Walter watches TV, Danny glances at the game's "jungle adventure" board, then turns his attention to a second board with an outer-space theme and "a path of colored squares leading... to a purple planet called Zathura." Just then, "with a click, a small green card popped out of the edge.... He picked it up and read, `Meteor showers, take evasive action.' " The boys don't act too surprised when a giant meteor falls into their tastefully appointed living room, but they do get excited when they see only stars and dark sky outside their windows. Several dice-rolls later, they're scrambling to evade a homicidal robot and a scaly "Zyborg pirate" climbing backward through the meteor-hole in the ceiling (its face goes unseen). As the boys play, their sibling rivalry gives way to cooperation, and grouchy Walter comes to appreciate his little brother. Van Allsburg illustrates the surreal events in a grainy charcoal-black that seems to shimmer on a rough, cream-colored ground. His deathly quiet images double spreads this time have a frozen stillness that leaves all color and activity to the imagination; with each new threat, the book seems to hold its breath. Van Allsburg reuses some devices, and Zathura, like Jumanji, is a satisfying enigma. The puzzling conclusion, involving a black hole and time travel to an earlier illustration, will have devotees scouring the first book and its sequel for clues. All ages.
Copyright 2002 Cahners Business Information, Inc.

Book Description Hardcover. Condition: New. 1st. Hardcover. On the last page of the Caldecott-winning book Jumanji, young Danny Budwing is seen running after his brother, Walter, with a game tucked under his arm. Now after twenty years, Chris Van A.Shipping may be from multiple locations in the US or from the UK, depending on stock availability. 32 pages. 0.598. Seller Inventory # 9780618253968