Items related to Discovering the Twentieth-Century World: A Look at...

Discovering the Twentieth-Century World: A Look at the Evidence 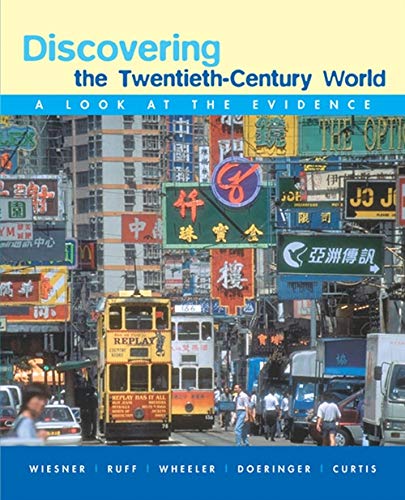 This primary source reader for the 20th-Century World course includes the latest scholarship in 20th-century history. Covering topics ranging from women's suffrage to the Suez Crisis, this text presents a balanced cultural approach within a chronicle of historical events and evidence, thereby promoting critical thinking, sharpening analytical skills, and building student interest. The text's unique, multi-part pedagogical framework guides students through the process of historical inquiry and exploration. Each chapter is organized by "The Problem," "Background," "The Method," "The Evidence," "Questions to Consider," and the "Epilogue." Diverse primary source materials include documents, maps, art, city plans, and statistical data that allow students to analyze events as a historian would. At the end of each chapter, the central theme, or "problem," is tied to contemporary issues.

Julius Ruff (Marquette University) received his Ph.D. from the University of North Carolina 1979. He is the author of Crime, Justice and Public Order in Old Regime France (Croom Helm, 1984) in addition to many articles and book reviews.

Frank Doeringer received his Ph.D. from Columbia University in 1971. He is a professor of history and East Asian studies at Lawrence University. He is a member of the Association for Asian Studies, the International Society for Chinese Philosophy, and the American Historical Association. His most recent award is a 1999 Lawrence Excellence in Teaching Award. In addition to his work on DISCOVERING THE GLOBAL PAST, he has had numerous articles published in various publications, most recently, The Journal of Chinese Philosophy. He has co-authored a school-level text, THE PEOPLES OF EAST ASIA (Wm Sadlier & Co., 1972) and a scholarly text on the Han Dynasty published by the University of Michigan Press.

Kenneth R. Curtis received his Ph.D. from the University of Wisconsin-Madison in African and Comparative World History. His research focuses on colonial to postcolonial transitions in East Africa, with a particular focus on the coffee economy of Tanzania. He is Professor of History at California State University Long Beach, where he has taught world history at the introductory level, in special courses designed for future middle and high school teachers, and in graduate seminars. He has worked to advance the teaching of world history at the collegiate and secondary levels in collaboration with the World History Association, the California History/Social Science Project, and the College Board's Advanced Placement World History course.

1. Discovering the Twentieth-Century World: A Look at the Evidence

5. Discovering the Twentieth-Century World: A Look at the Evidence