The Lord of the Rings Book and Bookend Gift Set 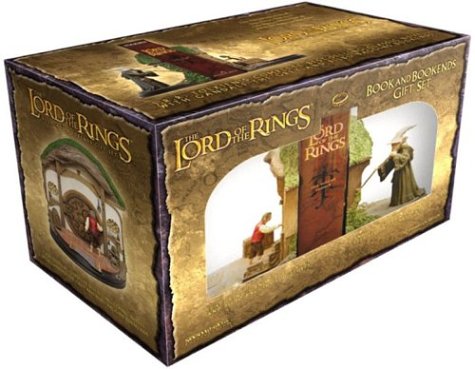 Presented here in hardcover with a beautiful jacket chosen through a global fan poll, J.R.R. Tolkien's epic masterpiece, The Lord of the Rings, has been hailed throughout the world as one of the greatest adventure stories ever written. Millions of readers have celebrated this exciting tale of hobbits, wizards, men, dwarves, and elves in a land called Middle-earth. Now millions of filmgoers have embraced the blockbuster motion picture trilogy that has fired the imaginations of a new generation.
Returning to Hobbiton after an absence of many years, the wizard Gandalf quickly sought out Bag End, the home of his old and dear friend the hobbit Bilbo Baggins. It was the morning of Bilbo's one hundred and eleventh birthday, and a party of special magnificence was planned for that night. The old hobbit had been plagued by the incessant attentions of unwanted visitors, well-wishers, and distant relations, prompting him to hang out a sign on his front gate warning "No admittance except on party business." It was in this grumpy state of mind that Bilbo, completely unprepared for the joyous reunion that awaited him, stomped to the door to answer Gandalf's knock.
These unique, limited-edition bookend sculptures have been hand-cast in heavyweight polystone and hand-painted to the highest standards by the artists of Sideshow/Weta, a unique partnership between museum-quality collectibles manufacturer Sideshow, Inc. and Weta Workshop of New Zealand, the artisans responsible for the conceptualization, prosthetics, makeup effects, weapons, armor, and miniatures for Peter Jackson's Lord of the Rings film trilogy.

This is a single-volume edition of J.R.R. Tolkien's Lord of the Rings trilogy, in which the hobbit Frodo and his elfish friends get swept up in a mighty conflict with the dark lord Sauron (who owes much to proud Satan in Paradise Lost), the monstrous Gollum, the Cracks of Doom, and the awful power of the magical Ring. The book's characters--good and evil--are recognizably human, and the realism is deepened by the magnificent detail of the vast parallel world Tolkien devised, inspired partly by his influential Anglo-Saxon scholarship and his Christian beliefs. (He disapproved of the relative sparseness of detail in the comparable allegorical fantasy his friend C.S. Lewis dreamed up in the Chronicles of Narnia, though he knew Lewis had spun a page-turning yarn.) It has been estimated that one-tenth of all paperbacks sold can trace their ancestry to J.R.R. Tolkien. But even if we had never gotten Robert Jordan's The Path of Daggers and the whole fantasy genre Tolkien inadvertently created by bringing the hobbits so richly to life, Tolkien's epic about the Ring would have left our world enhanced by enchantment. --Tim Appelo

Includes the 50th anniversary fully corrected text setting and an extensive new index"An extraordinary work -- pure excitement." -- New York Times Book ReviewOne Ring to rule them all, One Ring to find them, One Ring to bring them all and in the darkness bind them
In ancient times the Rings of Power were crafted by the Elven-smiths, and Sauron, the Dark Lord, forged the One Ring, filling it with his own power so that he could rule all others. But the One Ring was taken from him, and though he sought it throughout Middle-earth, it remained lost to him. After many ages it fell by chance into the hands of the hobbit Bilbo Baggins.
From Sauron's fastness in the Dark Tower of Mordor, his power spread far and wide. Sauron gathered all the Great Rings, but always he searched for the One Ring that would complete his dominion.
When Bilbo reached his eleventy-first birthday he disappeared, bequeathing to his young cousin Frodo the Ruling Ring and a perilous quest: to journey across Middle-earth, deep into the shadow of the Dark Lord, and destroy the Ring by casting it into the Cracks of Doom.
The Lord of the Rings tells of the great quest undertaken by Frodo and the Fellowship of the Ring: Gandalf the Wizard; the hobbits Merry, Pippin, and Sam; Gimli the Dwarf; Legolas the Elf; Boromir of Gondor; and a tall, mysterious stranger called Strider.
J.R.R. Tolkien (1892-1973), beloved throughout the world as the creator of The Hobbit, The Lord of the Rings, and The Silmarillion, was a professor of Anglo-Saxon at Oxford, a fellow of Pembroke College, and a fellow of Merton College until his retirement in 1959. His chief interest was in the linguistic aspects of the early English written tradition, but while he studied classic works of the past, he was creating a set of his own.
For information on other books by and about J.R.R. Tolkien published by Houghton Mifflin Harcourt, visit www.lordoftheringstrilogy.com."