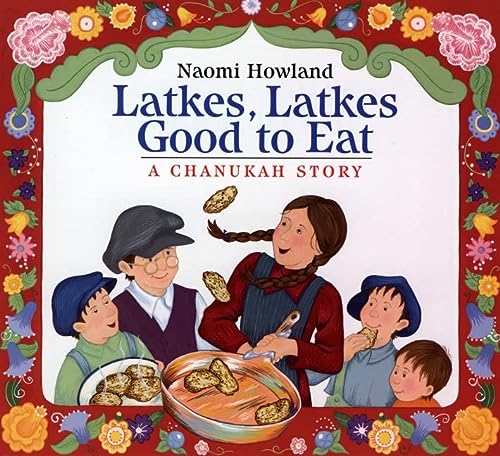 Sadie and her four little brothers are very poor and always hungry. On the first night of Chanukah, Sadie performs a generous act, and in turn receives a frying pan that cooks up sizzling hot, golden latkes on command. Sadie tells her brothers never to use the magic pan, but when she goes out one afternoon, the mischievous boys can't resist. They remember the words to start the pan cooking . . . but what were the words to make it stop? This humorous tale of generosity and greed is accompanied by bright, cheerful illustrations depicting a traditional Russian village. An author's note and a recipe for Sadie's latkes are included.

Naomi Howland is the author and illustrator of several books for children, including The Matzah Man: A Passover Story and Latkes, Latkes, Good to Eat: A Chanukah Story. She lives in Claremont, California.

A story that combines elements of familiar folktales and "The Sorcerer's Apprentice." Sadie and her four brothers are not looking forward to Chanukah; they are poor, and there is nothing to eat. Sadie goes out to collect firewood but takes pity on an old woman and gives her the wood. In return, the woman gives Sadie a magic frying pan. It will cook as many potato latkes (pancakes) as the family wants until Sadie utters the magic words that make it stop. The pan works fine while Sophie cooks, but when she leaves, the boys try--with predictable results. Latkes fill the house, then the streets, until Sadie arrives home to say the magic words. By that time, there are more than enough latkes for the whole village to feast. Howland effectively sets her story in a Russian shtetl, using words, intonation, and especially pictures. Working in gouache and colored pencil, she offers a snowy landscape peopled with Jewish villagers who work hard and celebrate harder. Especially nice is the overview of the villagers on the last night of Chanukah men and women whirling under the stars eating all those latkes. Ilene Cooper

Book Description Clarion Books. PAPERBACK. Condition: New. 061849295X BRAND NEW A portion of your purchase of this book will be donated to non-profit organizations. Over 1,000,000 satisfied customers since 1997! We ship daily M-F. Choose expedited shipping (if available) for much faster delivery. Delivery confirmation on all US orders. Seller Inventory # Z061849295XZN