Study Guide for Boyer/Clark/Hawley/Kett/Salisbury/Sitkoff/Woloch's The Enduring Vision: A History of the American People, Volume I: To 1877, Concise, 5th 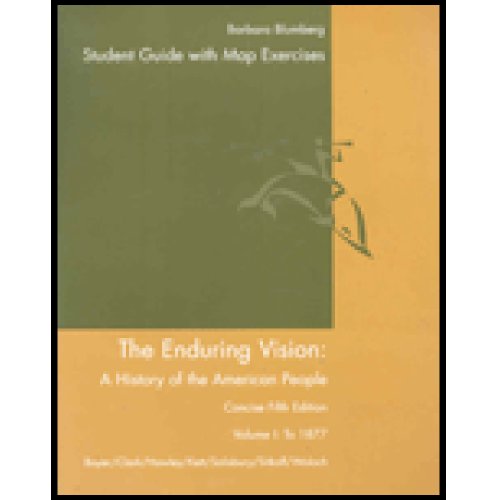 Paul S. Boyer, Merle Curti Professor of History Emeritus at the University of Wisconsin, Madison, earned his Ph.D. from Harvard University. An editor of NOTABLE AMERICAN WOMEN, 1607-1950 (1971), he also co-authored SALEM POSSESSED: THE SOCIAL ORIGINS OF WITCHCRAFT (1974), for which, with Stephen Nissenbaum, he received the John H. Dunning Prize of the American Historical Association. His other works include URBAN MASSES AND MORAL ORDER IN AMERICA, 1820-1920 (1978), BY THE BOMB'S EARLY LIGHT: AMERICAN THOUGHT AND CULTURE AT THE DAWN OF THE ATOMIC AGE (1985), WHEN TIME SHALL BE NO MORE: PROPHECY BELIEF IN MODERN AMERICAN CULTURE (1992), and PROMISES TO KEEP: THE UNITED STATES SINCE WORLD WAR II (3e, 2003). He is also editor-in-chief of the OXFORD COMPANION TO UNITED STATES HISTORY (2001). His articles and essays have appeared in the "American Quarterly," "New Republic," and other journals. He has been a visiting professor at the University of California, Los Angeles; Northwestern University; and the College of William and Mary.

Buy Used
Condition: Good
No guarantee that access code has... Learn more about this copy

1. Study Guide for Boyer/Clark/Hawley/Kett/Salisbury/Sitkoff/Woloch's The Enduring Vision: A History of the American People, Volume I: To 1877, Concise, 5th

Book Description Paperback. Condition: Good. No guarantee that access code has not been previously used or that CD is included. Moderate dirt wear, wrinkling or creasing on cover or spine, good binding, moderate writing/highlighting. Used book stickers, residue, or marker may be on cover or edges of book. Seller Inventory # 344571

Book Description Paperback. Condition: Good. Item is in good condition. Some moderate creases and wear. This item may not come with CDs or additional parts including access codes for textbooks. Might be an ex-library copy and contain writing/highlighting. Photos are stock pictures and not of the actual item. Seller Inventory # DS-0618604251-3