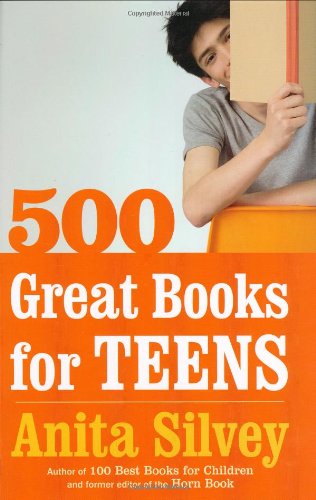 If you are looking for a book to give to a teenage reader, here's the reference you've been waiting for. Until now, there's been no accepted guide to what's good, bad, or indifferent in the flood of books coming off the presses in the hot new category of young-adult publishing. If it's true that you can't judge a book by its cover, it is especially true for teen books, as publishers take aim at a new class of readers. The books land on shelves without a history, and so there is no standard by which to judge them.

Anita Silvey, one of the country's leading authorities on books for young people, has interviewed teenage readers all over the country and immersed herself in young-adult books, with an emphasis on books published in the last five years. The result is this invaluable and very readable guide for parents, teachers, librarians, booksellers, reading groups, and of course teens themselves.

With its extended essays describing 500 selections, parents will quickly see what their teenagers are actually reading -- and will be able to find good books to introduce them to. Teachers can spot excellent additions to summer reading lists. Booksellers can move customers from one favorite to a host of others in the same genre. Librarians can round out collections. Book groups -- for adults, teens, or both -- will have hundreds of new titles to consider.

500 Great Books for Teens is divided into twenty-one sections, including adventure and survival, politics and social history, horror, romance, war and conflict, fantasy, plays, graphic novels, poetry, memoir, and spirituality. Every section offers up classics, but the majority of titles are new. In "Beyond the 500," Silvey compiles a number of useful lists, including books organized by geographic location and historical period, as well as recommended audio books.

Anita Silvey has spent more than thirty years in the children's book field, including eleven years as editor-in-chief at the Horn Book Magazine. She is the editor of Children’s Books and Their Creators and the author of 100 Best Books for Children and The Book-a-Day Almanac.

Introduction We live in a golden age of young adult publishing. A decade ago, critics proclaimed the death of the young adult novel, but this amazingly resilient group of books has surprised everyone and taken on new life. The range of titles published, their excellence, and their variety have never been more exciting, not even in the last heyday of young adult publishing, in the 1970s. New population demographics have brought eighty million young readers into the teenage category, the echo boomers of the baby boomers. Bookstores have increased space and visibility for teen books, causing more enthusiasm and more exposure. Harry Potter swept on the scene and then became an adolescent with a huge teen following. At the same time, revived by the movies, J.R.R. Tolkien captured his next devoted adolescent audience. Several titles that first appeared on adult lists - The Curious Incident of the Dog in the Night-Time, Life of Pi, and The Secret Life of Bees - were picked up and embraced by teens. Publishers started to hunt, frantically, for crossover books, books like Curious Incident that have wide appeal. Now, any consumer - in schools or libraries or bookstores - has many superb choices. In 2006 several thousand new titles will be published for readers twelve to eighteen. But how can anyone analyze all the young adult titles available? How can a concerned parent, teacher, grandparent, or teen find the best of this genre? How can adults select books that they feel comfortable giving? With these questions in mind, I set out to provide a guide for those perplexed about young adult books. The Nature and History of Young Adult Books I have over the last thirty-five years read thousands of young adult books, trying to understand the literature, what it can do at its best, and why it engenders such controversy. When I entered the publishing field in 1970, young adult books had just emerged as a distinct form. A year later, as the youngest person on the Horn Book review staff, I read these titles for authenticity; did they truly reflect teenagers of the 1960s and 1970s? As editor of The Horn Book Magazine, I watched young adult books mature in the 1980s and stagnate in the 1990s. Authors relied too much on formulas and assumptions about what teens wanted to read, and the literature lost its vitality. Then, around 2000, young adult literature gained a new passion, new focus, and new purpose. Great teenage literature has always addressed the fundamental questions of the teenage years: Who am I? Do I matter? How do I relate to others? In that literature, teens get blown off course by their hormones, just as they do in the real world. Teenage angst and ennui shape many of the characters. All young adult literature explores the problems of separation and empowerment. Sometimes that process can have terrible results - as Robert Cormier demonstrated in The