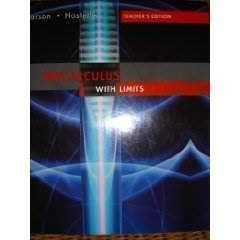 This interactive, text-specific software is a comprehensive learning source with a multitude of features to promote student success. The wealth of multimedia features combined with the complete text on CD-ROM make it an excellent tool for use at home, in classroom presentations, or in math laboratories.Its features include tutorial support, diagnostic feedback, chapter self-tests, guided exercises with step-by-step solutions, Meridiangraphing calculator emulators, videos, textbook content, and a glossary.