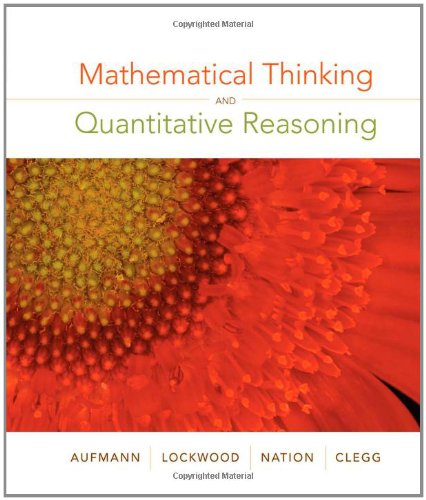 Designed for the non-traditional Liberal Arts course, Mathematical Thinking and Quantitative Reasoning focuses on practical topics that students need to learn in order to be better quantitative thinkers and decision-makers. The author team's approach emphasizes collaborative learning and critical thinking while presenting problem solving in purposeful and meaningful contexts. While this text is more concise than the author team's Mathematical Excursions (© 2007), it contains many of the same features and learning techniques, such as the proven Aufmann Interactive Method. An extensive technology package provides instructors and students with a comprehensive set of support tools.

Richard Aufmann is the lead author of two bestselling developmental math series and a bestselling college algebra and trigonometry series, as well as several derivative math texts. He received a BA in mathematics from the University of California, Irvine, and an MA in mathematics from California State University, Long Beach. Mr. Aufmann taught math, computer science, and physics at Palomar College in California, where he was on the faculty for 28 years. His textbooks are highly recognized and respected among college mathematics professors. Today, Mr. Aufmann's professional interests include quantitative literacy, the developmental math curriculum, and the impact of technology on curriculum development.

Daniel Clegg received his B.A. in Mathematics from California State University, Fullerton and his M.A. in Mathematics from UCLA. He is currently a professor of mathematics at Palomar College near San Diego, California, where he has taught for more than 20 years. In addition to writing with the Aufmann team, he co-authored "Brief Applied Calculus" with James Stewart. He has also assisted James Stewart with various aspects of his calculus texts and ancillaries for almost 20 years.