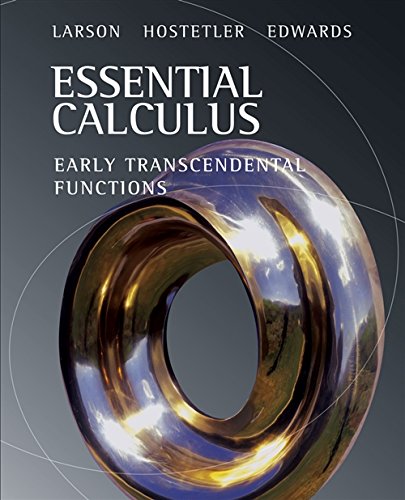 Essential Calculus: Early Transcendental Functions responds to the growing demand for a more streamlined and faster paced text at a lower price for students. This text continues the Larson tradition by offering instructors proven pedagogical techniques and accessible content and innovative learning resources for student success.

Dr. Ron Larson is a professor of mathematics at The Pennsylvania State University, where he has taught since 1970. He received his Ph.D. in mathematics from the University of Colorado and is considered the pioneer of using multimedia to enhance the learning of mathematics, having authored over 30 software titles since 1990. Dr. Larson conducts numerous seminars and in-service workshops for math educators around the country about using computer technology as an instructional tool and motivational aid. He is the recipient of the 2014 William Holmes McGuffey Longevity Award for CALCULUS: EARLY TRANSCENDENTAL FUNCTIONS, the 2013 Text and Academic Authors Association Award for CALCULUS, the 2012 William Holmes McGuffey Longevity Award for CALCULUS: AN APPLIED APPROACH, and the 1996 Text and Academic Authors Association TEXTY Award for INTERACTIVE CALCULUS (a complete text on CD-ROM that was the first mainstream college textbook to be offered on the Internet). Dr. Larson authors numerous textbooks including the bestselling Calculus series published by Cengage.

Book Description Condition: New. Brand New Original US Edition.We Ship to PO BOX Address also. EXPEDITED shipping option also available for faster delivery.This item may ship fro the US or other locations in India depending on your location and availability. Seller Inventory # AUDUU-108887