Items related to Gateways to Democracy: An Introduction to American... 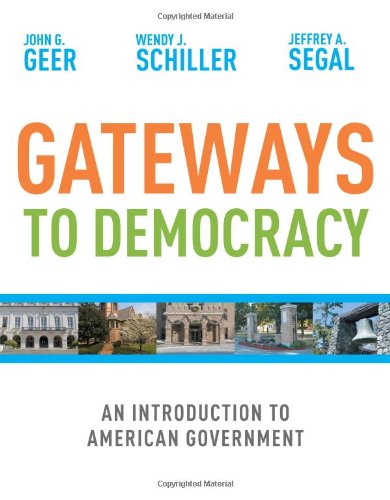 GATEWAYS TO DEMOCRACY begins and ends with student engagement. This new textbook by authors John G. Geer, Wendy J. Schiller, and Jeffrey A. Segal peels back the layers of the American political system to expose its inner workings and examine how competing interests can both facilitate and block the people's will. The authors provide a realistic yet optimistic view of the ways American Government can be both influenced by students and responsive to their hopes and dreams. GATEWAYS TO DEMOCRACY covers the core concepts required in an introductory course while challenging students to figure out their own standards for the society in which they want to live in the twenty-first century.

John G. Geer (Ph.D., Princeton University) is the Gertrude Conaway Vanderbilt Professor of Political Science at Vanderbilt University. He has been a visiting scholar at the Center for the Study of Democratic Politics at Princeton University and a research fellow at the Shorenstein Center at Harvard University. Geer is the former editor of The Journal of Politics. He has published numerous articles and several books, including IN DEFENSE OF NEGATIVITY, which won the Goldsmith Book prize from Harvard University in 2008. He has provided extensive commentary in the news media on politics, including live nationwide interviews for FOX, CNN, NBC, CBS, MSNBC, ABC, PBS, and NPR. Geer has also written op-ed pieces for Politico, The Washington Post, the LA Times, USA Today, and the Chicago Tribune. He teaches a range of undergraduate classes, including Introduction to American Government. In 2005, he won The College of Arts and Sciences' Jeffrey Nordhaus Award for Excellence in Undergraduate Teaching. In 2009, he won Vanderbilt University's Ellen Gregg Ingalls Award for Excellence in Classroom Teaching. In 2014, he won the Vanderbilt Alumni Education Award.

Wendy Schiller (Ph.D., University of Rochester) is Associate Professor of Political Science and Public Policy at Brown University (Twitter acct @profwschiller). She did her undergraduate work in political science at the University of Chicago, served on the staffs of Senator Daniel Patrick Moynihan and Governor Mario Cuomo, and completed Fellowships at the Brookings Institution and Princeton University. At Brown, she teaches popular courses titled The American Presidency, Introduction to the American Political Process, and Congress and Public Policy. Among books she has authored or co-authored are THE CONTEMPORARY CONGRESS (Thomson-Wadsworth) and PARTNERS AND RIVALS: REPRESENTATION IN U.S. SENATE DELEGATIONS (Princeton University Press). She has also published in academic journals, including the American Journal of Political Science, Legislative Studies Quarterly, Studies in American Political Development, and the Journal of Politics. Her most recent book is ELECTING THE SENATE: INDIRECT DEMOCRACY BEFORE THE 17TH AMENDMENT. She is a frequent contributor to major national news outlets and is the political analyst for WJAR10, the local NBC affiliate in Providence, Rhode Island.

Jeffrey A. Segal (Ph.D., Michigan State University) is Political Science Department Chair and SUNY Distinguished Professor at Stony Brook University. He has recently been Senior Visiting Research Scholar at Princeton University and a Guggenheim Foundation Fellow. He has also been Global Research Fellow at New York University's Hauser Global Law School Program and Fellow of the Law and Social Sciences Program at Northwestern University. He has worked with the U.S. Department of Labor, the Department of Housing and Urban Development, and the New York State Assembly. Segal is the author of eight books, including SENATE ELECTIONS (1992, with Alan Abramowitz) and ADVICE AND CONSENT: THE POLITICS OF JUDICIAL APPOINTMENTS (2005, with Lee Epstein). He teaches undergraduate courses on American Government, Constitutional Law, Civil Liberties, and Supreme Court Decision Making. He has received several awards, including Green Bag's award for Exemplary Legal Writing (2008) and an award sponsored by the American Bar Association for innovative teaching and instructional methods (2008). In 2012, Segal was elected as a member of the American Academy of Arts and Sciences.

"This textbook transforms American politics from a subject to be taught to students to a tool that students can learn to use. The focus strikes me as one designed to empower our students. Hurrah. I love it."- Jenna Bednar, University of Michigan

"This appeals to me because it allows students an approach to learning that is cohesive and systematic. They can understand the big picture while learning the details. . . . This approach is absolutely sound. I am seriously appreciative that this text does what IÂ've thought necessary for years."- John Shively, Longview Community College

"The vignettes are a great feature and one that I think is critical to the theme of the book. I think this book does a better job at covering the historical aspect of each topic more so than the book I use now."- Mary Barnes-Tilley, Blinn College