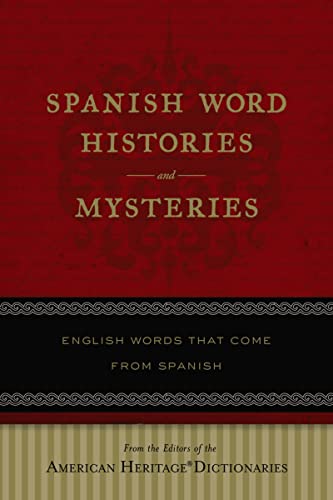 Most people know that words like burrito and quesadilla come from Spanish, but there are many more English words that we would never suspect are Spanish until we look closely. Did you know that the words breeze and hammock come from Spanish? The jerky in beef jerky, for example, is from Spanish charquí, and the English verb vamoose is from the expression ?Vamos! which means Let’s go! in Spanish.
Spanish Word Histories and Mysteries: English Words that Come from Spanish tells the fascinating stories behind 200 English words from Spanish. Every sphere of English vocabulary has been enriched by Spanish, from names for animals—alligator, coyote, and mosquito—to words for weather—hurricane and tornado. This book also explores the Spanish origin of some of the colorful expressions of the Old West: bonanza, loco, mustang, ranch, and ten-gallon hat. Of course, the book digs into the many words for different foods that come from Spanish—not only the obvious ones, such as salsa and taco, but also potato, tomato, caramel, vanilla, and, most important, chocolate. Photographs and line drawings enliven the pages and illustrate the history of the words.

THE EDITORS OF THE AMERICAN HERITAGE DICTIONARIES are a team of professional lexicographers with advanced degrees in various scholarly fields. The editors familiarize themselves with the vocabulary in specific subject areas, collect materials on new developments and usage, and work with expert consultants to ensure that their publications are accurate and up-to-date.

Noting that Spanish is the second most common language spoken in the U.S., the editors of the American Heritage Dictionaries have compiled a small volume about English words derived from the Spanish. After a brief introduction about the history of Spanish and its relationship with English, the editors profile 150 words that are now common in the English language. They define each word and explain its history and journey into the English language. Readers will enjoy learning about the origins of these words, from abalone to zocalo, with stopovers for the expression moment of truth and potato. The book also has a glossary of linguistic terms and a bibliography of quotation sources. --Barbara Bibel

Book Description Houghton Mifflin Harcourt (HMH). Condition: NEW. Tells fascinating stories with examples about words and expressions that have made their way from Spanish to English. Words such as barbecue, breeze, embargo, hammock, hurricane, incommunicado and vamoose and then there is the potato, tomato, chocolate and vanilla. If you are a student of Spanish or perhaps you just love words you will find this history of words a delight. Seller Inventory # 9780618910540