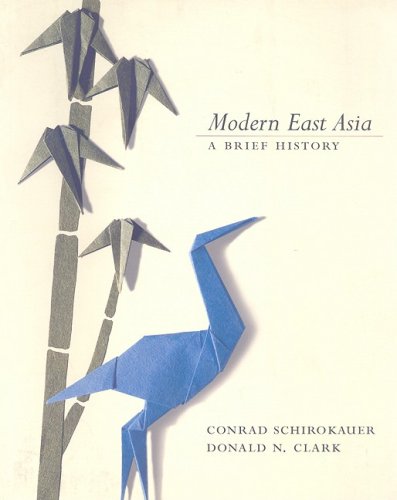 Focusing on the civilizations--the art and religion as well as the political and social--this compelling history explores the four countries of modern East Asia: China, Japan, Korea and Vietnam. From their traditions and commonalties in 1600, through trends toward industrialization and state building, to each country's response to modernization in a global environment, authors Conrad Schirokauer and Donald N. Clark explore the complexity, severally and together, of countries that never fail to fascinate.

Conrad Schirokauer currently serves as Senior Scholar and Adjunct Professor at Columbia University as well as Professor Emeritus at the City University of New York. In addition to A BRIEF HISTORY OF CHINESE AND JAPANESE CIVILIZATIONS (and its separate volumes on China and Japan), he has published articles on Song intellectual history and served as co-editor (with Robert Hymes) of ORDERING THE WORLD: APPROACHES TO STATE AND SOCIETY IN SUNG DYNASTY CHINA and as translator of CHINA'S EXAMINATION HELL, by Miyazaki Ichisada.

Donald Clark is Professor of History and Director of International Programs at Trinity University in San Antonio, Texas. He earned his Ph.D. in East Asian history at Harvard University and is a leader in the field of Korean Studies. His publications include CHRISTIANITY IN MODERN KOREA (1986), CULTURE AND CUSTOMS OF KOREA (2000), and LIVING DANGEROUSLY IN KOREA, 1900-1950 (2003) as well as contributions to THE KWANGJU UPRISING (1988), the Asia Society's Korea Briefing series, and the CAMBRIDGE HISTORY OF CHINA.

"Conrad Schirokauer, Senior Scholar and Adjunct Professor at Columbia and Professor Emeritus at the City University of New York, received his doctorate from Stanford. He has studied in Paris and conducted research in Japan and China. His published papers and articles deal mostly with Song intellectual history. He is co-editor, with Robert Hymes, of ORDERING THE WORLD: APPROACHES TO STATE AND SOCIETY IN SUNG DYNASTY CHINA (Berkeley: University of California Press, 1993). His current research is on Song perceptions of and attitudes toward history. Schirokauer was associated with a New York University summer graduate program for teachers in Japan and China and remains interested in how history is taught and written. As a textbook author, he has published A BRIEF HISTORY OF CHINESE AND JAPANESE CIVILIZATIONS (Second Edition 1989), with separate volumes on China (1990) and Japan (1993), all now available from Wadsworth. Also worth mention, is his translation OF CHINA'S EXAMINATION HELL by Miyazaki Ichisada (New Haven: Yale University Press, 1976, 1981), which he recommends to any student who feels burdened by examinations."