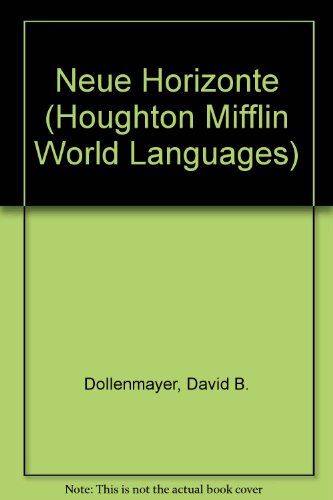 This edition of Neue Horizonte is accompanied by a new video, which consists of fifteen modules to accompany each chapter of the student text. This two-tier video was shot on location in Germany, Austria, and Switzerland and features situational clips with recurring characters as well as interview segments. In each situational clip, a group of young people played by native German-speaking actors using idiomatic language engage in social situations related to the chapter's cultural theme. The script for those brief, colloquial scenes was written to reinforce and augment the material in the textbook.

David B. Dollenmayer is Professor of German at the Worcester Polytechnic Institute in Worcester, Mass. He received his B.A. and Ph.D. from Princeton University and was a Fulbright fellow at the University of Munich. Dr. Dollenmayer has written on 20th century writers Alfred Döblin, Joseph Roth, Christa Wolf, and Ingeborg Bachmann. In addition, he is the author of THE BERLIN NOVELS OF ALFRED DÖBLIN (Berkeley, CA: University of California Press, 1988) and the translator of works by Michael Kleeberg, Anna Mitgutsch, Perikles Monioudis, and Moses Rosenkranz.