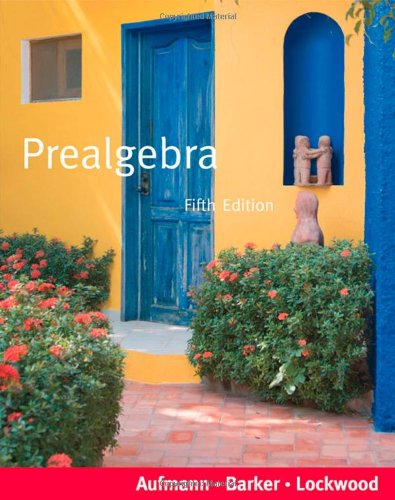 Prealgebra, 5/e, is a consumable worktext that helps students make the transition from the concrete world of arithmetic to the symbolic world of algebra. The Aufmann team achieves this by introducing variables in Chapter 1 and integrating them throughout the text. This text's strength lies in the Aufmann Interactive Method, which enables students to work with math concepts as they're being introduced. Each set of matched-pair examples is organized around an objective and includes a worked example and a You Try It example for students. In addition, the program emphasizes AMATYC standards, with a special focus on real-sourced data. The Fifth Edition incorporates the hallmarks that make Aufmann developmental texts ideal for students and instructors: an interactive approach in an objective-based framework; a clear writing style; and an emphasis on problem solving strategies, offering guided learning for both lecture-based and self-paced courses. The authors introduce two new exercises desi

Richard Aufmann is the lead author of two best-selling Developmental Math series and a best-selling College Algebra and Trigonometry series, as well as several derivative Math texts. Mr. Aufmann taught Math, Computer Science and Physics at Palomar College in California, where he was on the faculty for 28 years. His textbooks are highly recognized and respected among college mathematics professors. Today, Mr. Aufmann's professional interests include quantitative literacy, the developmental math curriculum and the impact of technology on curriculum development. He holds a Bachelor of Arts in Mathematics from the University of California, Irvine, and a Master of Arts degree in Mathematics from California State University, Long Beach.

Vernon Barker has retired from Palomar College where he was Professor of Mathematics. He is a co-author on the majority of Aufmann texts, including the best-selling developmental paperback series.