Items related to Fundamentals of Economics 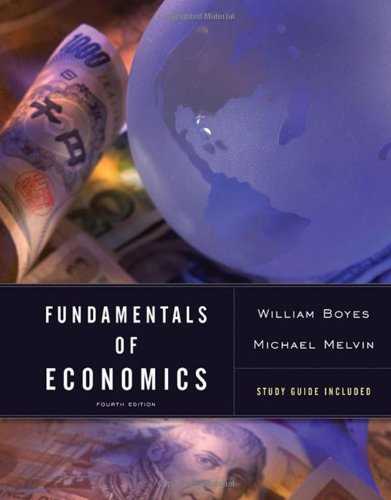 Based on the comprehensive two-semester text by the same authors, this version of Economics "boils down" the formal economic theories and concepts into their essential parts, emphasizing domestic and international applications and policy issues. Fundamentals of Economics is a concise but thorough survey of economics for instructors desiring a brief, practical text. Each chapter focuses on core economic concepts and provides a link between theory and real-world relevance, making the content more meaningful for students. The Fourth Edition provides a convenient, integrated learning experience by including a Study Guide after each chapter, which allows students to review key concepts and practice new skills before they go on to read the next chapter. Fundamental Questions at the beginning of each chapter preview key points, reappear next to the relevant in-text discussion, and form the basis of chapter-ending Summary sections. The design highlights these Fundamental Questions, making them easier to find within a chapter. Economic Insight and Global Business Insight boxes focus on the policies of today's leaders and the business decisions of real companies and governments around the world, adding real-world relevance to the material.

Dr. William Boyes is professor of economics at Arizona State University. He received his Ph.D. in economics from the Claremont Graduate School in 1974. Before joining the Arizona State faculty, he was the Distinguished Visiting Professor of Business at Weber State University; visiting professor at Tsinghua University, Beijing, China and the University of London, London, England, and lectured at ITAM in Mexico City; and was the dean of the College of Business at Cal Poly, San Luis Obispo. Dr. Boyes has also served as chairman of the Economics Department at ASU and has been an economist with Security Pacific National Bank (now Bank of America). He has been a consultant to the White House, the Commerce Department, the Federal Trade Commission, and several private firms. He is the director of the office of economic education at ASU and a member of the Pacific Research Institute's Academic Advisory Board. Dr. Boyes has received many teaching awards, including the Golden Key National Honor Society Outstanding Professor Award at ASU in 1988, the Outstanding Teacher in the MBA Program Award at ASU in 1994, the Outstanding Teacher in the College of Business Award at ASU in 1995, Huizingh Outstanding Honors Professor in 2007, and Outstanding MBA Professor in 2008.