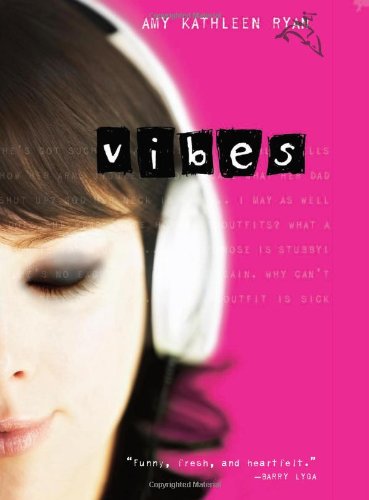 Nothing is beyond Kristi Carmichael’s disdain—her hippie high school, her friend Jacob, her workaholic mom. Yet for all her attitude and her mind-reading abilities, Kristi has a vulnerable side. She can hear the thoughts of her fellow students, calling her fat and gross. She’s hot for Gusty Peterson, one of the most popular guys in school, but of course, she’s sure he thinks she is disgusting. And she’s still mad at her father, who walked out on them two years ago. Soon, a school project brings her together with Gusty, her father comes home and drops a bombshell, and a friend comes out of the closet, and suddenly she is left doubting that she can read people at all.

Bitingly funny but ultimately poignant and positive, this YA novel is completely on the mark.

Amy Kathleen Ryan reads huge numbers of books and magazines but has not had success in reading minds, though not for lack of trying. She always knew she wanted to write, and thus earned an M.A. in English literature and graduated from the New School Creative Writing for Children Program. She now lives with her family in Colorado. This is her second novel.

It isn’t easy being able to read minds. People think up some pretty nasty sewage. Like the other day—I’m walking home from school when I come across an old guy walking his smelly Doberman. He’s definitely a candidate for this year’s Stodgiest American Award. Black suit coat, gray pants, white stuff in the corners of his mouth. He takes one look at my thick legs in their fishnets and my skirt that I made out of Mylar birthday balloons and my tank top that barely contains my ginormous boobs and finally the eyeliner I cake over my eyes because it makes me look dangerous, and he thinks: Ugly bitch.

I could shed a lot of light on human nature if people knew that I read minds. Scientists would study me. I’d be in some lab strapped to a table and they’d put a huge machine around my head to measure my brain waves, and they’d nod to one another and say, “Fascinating. Fascinating.” And they’d all have really big pores and very white skin, because scientists never go outside. That’s why I don’t talk to anyone except for my Aunt Ann about my powers. The last thing I need is researchers sticking needles into my brain. If you’re wishing you were psychic, too, believe me, you do NOT want to know what people are thinking. People are mean, nasty, selfish slobs, and 99 percent of the time their brain vibes hurt your feelings and you have to go around trying not to remember that Gusty Peterson, the cutest guy in school, looked at you yesterday and thought, Sick.

I don’t like Gusty Peterson anyway. He always wears baseball caps backwards and extra-big jeans, and he tries to walk with a loose, tough- guy swagger that makes him look dumb. He’s a jerk-off. Too bad he also happens to be so gorgeous that when you look at his perfect tanned face and blond curls your eyes water. That’s one more thing I can tell you about human nature: beautiful people are the last ones you want to befriend. Beautiful people float through life thinking that it’s perfectly natural for others to gaze at them adoringly, and open doors for them, and defer to their opinion about whether or not the streamers for the prom should droop in the middle. Doesn’t anyone understand that beautiful people are stupid? That’s why nature made them beautiful, so they’d have some chance of surviving in the wild. And how do they survive? They use people and then they drop people, and they float away on the currents of their own gorgeousness to the next poor girl who thinks that being friends with a beautiful person will somehow make her beautiful, too. I’ve got news for you: hanging around beautiful people just makes you uglier by comparison.

I learned all this from my ex–best friend, Hildie Peterson—Gusty’s sister. She is one of the most gorgeous people in the whole world. She’s skinny and petite. Her eyes are slanty like a cat’s and her hair is light blond and glossy, so when you first see it you think that color can’t be natural, but then when you get closer you realize that it’s totally natural and you feel even worse about your mousy brown. She has never had a pimple in her entire life, and she’s been doing gymnastics since she was four years old, so she glides like a swan. She’s practically a freak, she’s so beautiful. I used to like her, when she didn’t understand how pretty she was. That was until we hit high school, and suddenly the entire lacrosse team was asking her out. They loved her so much, they practically carried her on their shoulders through the hallways of the school. Did Hildie ever look back at me—her big-breasted, psychic, slightly freaky friend—as she drifted into the stratosphere of popularity? Would you?