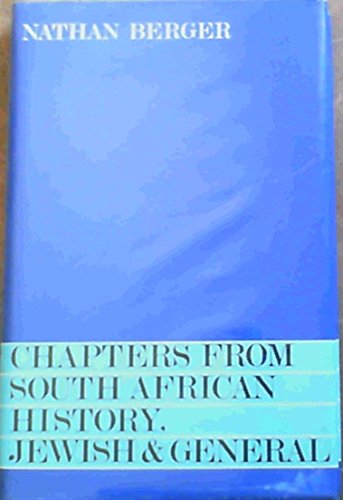 1. Chapters from South African history, Jewish and general (Book 2 Only)

2. Chapters from South African history, Jewish and general - Volume 2 only

Book Description Kayor Publishers, 1986. Hardcover. Condition: Very Good. Dust Jacket Condition: Very Good. The dust jacket is a little shelf rubbed, minor marks and edge worn. There is foxing around the block of the book. Now protected in cellophane. The text within the book is clear. The binding is excellent. GK. Our orders are shipped using tracked courier delivery services. Seller Inventory # 6ovqh

Book Description Kayor Publishers, Johannesburg, 1982. Hardcover. Condition: Good. Dust Jacket Condition: Fair. First Edition. Two volumes (complete). Same ISBN for both volumes. Berger signed the frontispage of Book 1 (dated: 18.3.82). Book 1 is devoted to Johannesburg. Book 2 is more general in its breadth. In general both are in contented condition. Both books have a sound plastic protective covers. These are in sure condition. The papertrims have streaks of foxing. Within, the contents are assured, neat, clear, clean, confident, agreeable. fk. Our orders are shipped using tracked courier delivery services. Signed. Seller Inventory # bewc

Book Description Kayor Publishers, Johannesburg, South Africa, 1982. Hardcover. Condition: Good. Dust Jacket Condition: Good. First Edition. In the chapters that follow, the story is told of the arrival and early years of the masses of Jewish immigrants from the Eastern Europe of the 1930s, the time of Hitler's emergence in Germany, and just before the Quota Act he came Law and immigration to South Africa ended. They were truly heroic men and women who were forced to tear up their roots in their homeland, and unaided and with their indomit able faith and courage, built new homes in this land, and raised up children, grandchildren and great grandchildren who made invalu able contributions to the life of this country's political, cultural and economic spheres, and in the fields of art, science, education and philanthropy. Their perplexities, pains, joys and sorrows, and their eventual transformation and achievements in their new-found freedom is re told through documents, pictures and reminiscences by a contempo rary himself an immigrant, having arrived from Lithuania (Keidan) as a teenager in 1930. ----------------------------------------------------------------- Reading copy - clipped flyleaf - pen markings and library stamps - 214 pages with black-and-white photographs. ------------------ Orders over $100.00 are shipped using tracked courier delivery services. Size: Roughly 5˝ " Wide and 8˝ " Tall. Seller Inventory # 000265