Items related to Mountain Flowers: Field Guide to the Flora of the Drakensber...

Mountain Flowers: Field Guide to the Flora of the Drakensberg and Lesotho

Mountain Flowers: Field Guide to the Flora of the Drakensberg and Lesotho 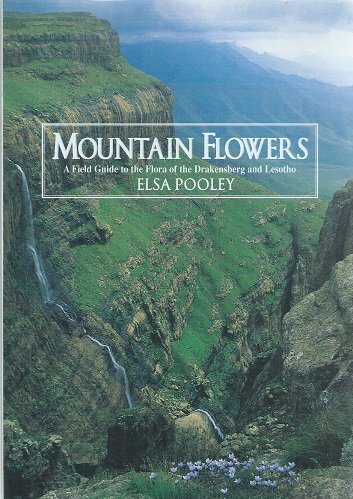 A guide on the high mountain region which includes the plants, wild flowers, trees, shrubs, ferns and some grasses from the foothills to the summit, with special attention to the large number of endemic species; Southern and Northern KwaZulu; Natal Drakensberg, Eastern Cape Drakensberg, Witteberge and Lesotho, including the Maloti and Thaba Putsoa ranges as well as outliers such as Ingeli, Mahaqhwa and Kamberg.

Dr. Elsa Pooley DSc (honoris causa) (UKZN) is a skilled botanical artist and practical botanist with more than 40 years' experience in the field. Elsa lives on the south coast of KwaZulu-Natal, near the village of Clansthal. Originally based in the game reserves of Zululand, her research has included pioneering work on the traditional uses of plants by the people of Maputaland. Her botanical tours take local and international visitors to explore the flora of the eastern region of South Africa, particularly the Drakensberg and Lesotho alpine region. Elsa's knowledge and versatility bridges the divide between the popular and the academic. She has worked closely with the National Botanical Institute, in particular the Natal Herbarium in preparation of the Flora and Fauna Publications Trust books.

Shipping: US$ 10.66
From United Kingdom to U.S.A.
Destination, rates & speeds

Shipping: US$ 40.01
From United Kingdom to U.S.A.
Destination, rates & speeds

3. Mountain Flowers: Field Guide to the Flora of the Drakensberg and Lesotho (Igobooks)

Shipping: US$ 46.68
From United Kingdom to U.S.A.
Destination, rates & speeds