Items related to Judaism and Modernity 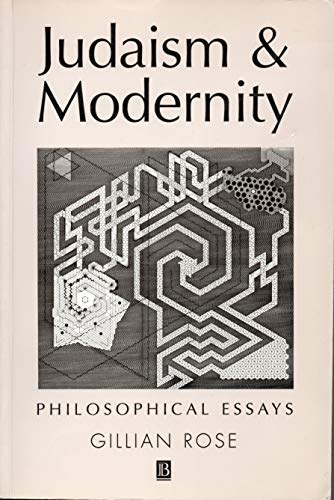 In Judaism and Modernity Gillian Rose continues to develop a philosophical alternative to deconstruction and post-modernism by critically re-engaging the social and political issues at stake in every reconstruction. The chapters cover Judaism and philosophy, ethics and law (Halacha), `The Future of Auschwitz', post-modern theology, Judaism and architecture, Judaism in Hegel, Nietzsche, Adorno and Derrida, and modern Jewish thinkers - Cohen, Rosenzweig, Buber, Benjamin, Strauss, Arendt, Weil and Levinas. The opposition between philosophical reason and Judaic ethics is shown to ruin the possibility of critical reflection and of political action. The risks of critical rationality are reformulated for modern philosophy and for modern Jewish thought.

Gillian Rose is Professor of Social and Political Thought in the Department of Sociology at the University of Warwick. She is the author of The Broken Middle (Blackwell), The Dialect of Nihilism (Blackwell), Hegel Contra Sociology (Athlone), and The Melancholy Science: An Introduction to the Thought of Theodor W. Adorno (Macmillan).

Book Description Blackwell, 1994. Condition: Fair. This is an ex-library book and may have the usual library/used-book markings inside.This book has soft covers. In fair condition, suitable as a study copy. Please note the Image in this listing is a stock photo and may not match the covers of the actual item,550grams, ISBN:9780631189718. Seller Inventory # 8210377

Book Description Blackwell, 1994. Condition: Good. This is an ex-library book and may have the usual library/used-book markings inside.This book has hardback covers. In good all round condition. No dust jacket. Re-bound by library. Please note the Image in this listing is a stock photo and may not match the covers of the actual item,550grams, ISBN:9780631189718. Seller Inventory # 9007417

Book Description Wiley-Blackwell, 1993. Condition: Good. A+ Customer service! Satisfaction Guaranteed! Book is in Used-Good condition. Pages and cover are clean and intact. Used items may not include supplementary materials such as CDs or access codes. May show signs of minor shelf wear and contain limited notes and highlighting. Seller Inventory # 0631189718-2-4

Book Description Blackwell Publishers, Oxford, U.K. & Cambridge, U.S.A., 1993. Paperback. Condition: Good. Ex Library (St. Edmund Hall, Oxford) paperback in good condition. Cover is lightly shelfworn, with creases along the spine and on the rear upper leading corner, affecting closing pages. Stickers taped to the rear of cover and spine foot. Stamps on the marked page block and one or two pages. Labels on the front inside cover and half title page. The binding is sound; all text is clear. CM. Used. Seller Inventory # 478895

Shipping: US$ 12.99
From United Kingdom to U.S.A.
Destination, rates & speeds

Book Description Brand: Wiley-Blackwell, 1993. Paperback. Condition: VERY GOOD. Pages are intact and are not marred by notes or highlighting, but may contain a neat previous owner name. The spine remains undamaged. Supplemental materials are not guaranteed with any used book purchases. Seller Inventory # 0631189718_abe_vg