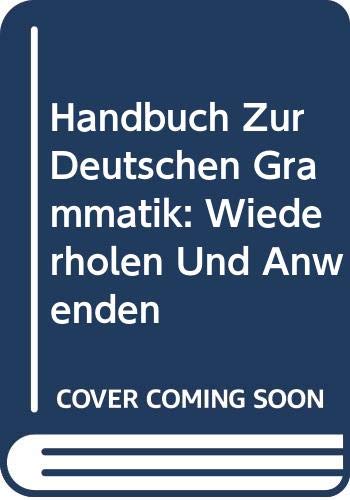 This intermediate, modular approach to German grammar serves as both reference handbook and practice manual. The organization of the 30 chapters allows instructors to teach sequentially or in modules, as each chapter is self-contained and can be used in any order. The chapter structure provides a presentation of new information, followed by material for oral and written practice: Grammatik (grammar), Worschatz (vocabulary), Übungen (exercises, self-, and small-group practice), Anwendung (application, in-class group activities), Schriftliche Themen (writing topics), and Zusammenfassung (summary).

Jamie Rankin is director of the Princeton University Center for Language Study, and coordinator of language teaching and pedagogy in the Department of German. He has been a senior lecturer at Princeton since 1991. After completing a Ph.D. in German literature at Harvard University, he went on to specialize in second-language acquisition and pedagogy in the Department of Second Language Studies at the University of Hawaii. His work focuses on language teaching methodologies and curriculum development; the dynamics of foreign language classroom interactions; and how to train instructors to integrate second-language acquisition research in their classroom preparation and interaction. His research has frequently taken the form of collaborative classroom research with graduate student assistants and instructors in the department, and several of these studies have been published?including two awarded the Unterrichtpraxis' prize for Best Articles of the Year in 1999 and again in 2006.

Deceased. Professor Wells received his Ph.D. from Ohio State with a specialization in 19th century German literature. He championed student-centered, communicative learning that made students active partners in the classroom. His numerous publications, including HANDBUCH ZUR DEUTSCHEN GRAMMATIK, are considered by most educators in German as benchmarks in the field of German language instruction.