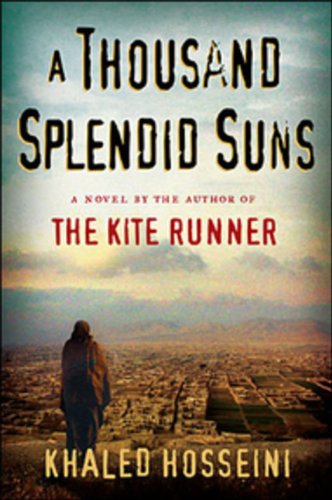 After more than two years on the bestseller lists and over four million copies in print, Khaled Hosseini returns with a beautiful, riveting, and haunting novel of enormous contemporary relevance.

A Thousand Splendid Suns is a breathtaking story set against the volatile events of Afghanistan’s last thirty years—from the Soviet invasion to the reign of the Taliban to post-Taliban rebuilding—that puts the violence, fear, hope, and faith of this country in intimate, human terms. It is a tale of two generations of characters brought jarringly together by the tragic sweep of war, where personal lives—the struggle to survive, raise a family, find happiness—are inextricable from the history playing out around them.

Propelled by the same storytelling instinct that made The Kite Runner a beloved classic, A Thousand Splendid Suns is at once a remarkable chronicle of three decades of Afghan history and a deeply moving account of family and friendship. It is a striking, heart-wrenching novel of an unforgiving time, an unlikely friendship, and an indestructible love—a stunning accomplishment.

It's difficult to imagine a harder first act to follow than The Kite Runner: a debut novel by an unknown writer about a country many readers knew little about that has gone on to have over four million copies in print worldwide. But when preview copies of Khaled Hosseini's second novel, A Thousand Splendid Suns, started circulating at Amazon.com, readers reacted with a unanimous enthusiasm that few of us could remember seeing before. As special as The Kite Runner was, those readers said, A Thousand Splendid Suns is more so, bringing Hosseini's compassionate storytelling and his sense of personal and national tragedy to a tale of two women that is weighted equally with despair and grave hope.

We wanted to spread the word on the book as widely, and as soon, as we could. See below for an exclusive excerpt from A Thousand Splendid Suns and early reviews of the book from some of our top customer reviewers.--The Editors

We have arranged with the publisher to make an exclusive excerpt of A Thousand Splendid Suns available on Amazon.com. Click here to read a scene from the novel. It's not the opening scene, but rather one from a crucial moment later in the book when Mariam, one of the novel's two main characters, steps into a new role.
We queried our top 100 customer reviewers as of March 6, 2007, and asked them to read A Thousand Splendid Suns and share their thoughts. We've included these early reviews below in the order they were received. For the sake of space, we've only included a brief excerpt of each reviewer's response, but each review is available for reading in its entirety by clicking the "Read the review" link.

Joanna Daneman: "His style is deceptively simple and clear, the characters drawn deftly and swiftly, his themes elemental and huge. This is a brilliant writer and I look forward to more of his work." Read Joanna Daneman's review

Donald Mitchell: "Khaled Hosseini has succeeded in capturing many important historical and contemporary themes in a way that will make your heart ache again and again. Why will your reaction be so strong? It’s because you’ll identify closely with the suffering of almost all the characters, a reaction that’s very rare to a modern novel." Read Donald Mitchell's review

Lawrance M. Bernabo: "All things considered, following up on a successful first novel is probably harder than coming up with the original effort and Hosseini could have rested on his laurels in the manner of Harper Lee, but as "A Thousand Splendid Suns" amply proves, this native of Kabul has more stories to tell about the land of Afghanistan." Read Lawrance M. Bernabo's review

Amanda Richards: "There are parts of this book that will have grown men surreptitiously blotting the tears that are on the verge of overflowing their ducts, and by the time you get to the middle, you won’t be able to put it down. Hosseini's simple but richly descriptive prose makes for an engrossing read, and in my opinion, "A Thousand Splendid Suns" is among the best I have ever read. This is definitely not one to be missed." Read Amanda Richards's review

N. Durham: "All that being said, "A Thousand Splendid Suns" is a bit more enjoyable than Hosseini’s previous "The Kite Runner", and once again he manages to give we readers another glimpse of a world that we know little about but frequently condemn and discard. However, if you were one of the many that for some reason absolutely loved "The Kite Runner", chances are that you'll love this as well." Read N. Durham's review

John Kwok: "Khaled Hosseini's "A Thousand Splendid Suns" is a genuine instant literary classic, and one destined to be remembered as one of 2007's best novels. It should be compared favorably to such legendary Russian novels like "War and Peace" and "Doctor Zhivago"." Read John Kwok's review

Thomas Duff: "Normally I'm more of an action-adventure type reader when it comes to novels and recreational reading. But I was given the chance to read A Thousand Splendid Suns by Khaled Hosseini (author of The Kite Runner), so I decided to try something out of my normal genre. I am *so* glad I did. This is a stunning and moving novel of life and love in Afghanistan over a 30 year period." Read Thomas Duff's review

Charles Ashbacher: "This book manages to simultaneously capture the history of Afghanistan over the last thirty years and how women are treated in conservative Islamic societies.... In many ways it is a sad book, your heart goes out to these two women in their hopeless struggle to have a decent life with a brutal man in an unforgiving, intolerant society." Read Charles Ashbacher's review

W. Boudville: "Hosseini presents a piognant view into the recent tortured decades of the Afghan experience. From the 1970s, under a king, to the Soviet takeover, to the years of resistance. And then the rise and fall of the Taliban. An American reader will recognise many of the main political events. But to many Americans, Afghanistan and its peoples and religion remain an opaque and troubling mystery." Read W. Boudville's review

Mark Baker: "I tend to read plot heavy books, so this character study was a definite change of pace for me. I found the first half slow going at times, mainly because I knew where the story was going. Once I got into the second half, things really picked up. The ending was very bittersweet. I couldn't think of a better way to end it." Read Mark Baker's review

Grady Harp: "Hosseini takes us behind those walls for forty some years of Afghanistan's bloody history and while he does not spare us any of the descriptions of the terror that continues to besiege that country, he does offer us a story that speaks so tenderly about the fragile beauty of love and devotion and lasting impression people make on people." Read Grady Harp's review

Robert P. Beveridge: "When I was actively reading it, the pages kept turning, and more than once I found myself foregoing food or sleep temporarily to get in just one more chapter. When I had put it down, however, I felt no particular compulsion to pick it back up again. It's a good book, and a relatively well-written one, but it's not a great book. Enjoyable without leaving a lasting impression." Read Robert P. Beveridge's review

B. Marold: "While the events in Afghanistan and the wider world create a familiar framework for the stories of these two women, it is nothing more than a framework. The warp and weft of everyday life, and the interaction of the two women and their close relatives is the heartbeat of the story." Read B. Marold's review

Daniel Jolley: "Khaled Hosseini has written a majestic, sweeping, emotionally powerful story that provides the reader with a most telling window into Afghan society over the past thirty-odd years. It's also a moving story of friendship and sacrifice, giving Western readers a rare glimpse into the suffering and mistreatment of Afghan women that began long before the Taliban came to power." Read Daniel Jolley's review

Khaled Hosseini is one of most widely read and beloved novelists in the world, with more than ten million copies sold in the United States of The Kite Runner and A Thousand Splendid Suns, and more than thirty-eight million copies sold worldwide in more than seventy countries. Hosseini is also a Goodwill Envoy to the United Nations High Commissioner for Refugees, the UN Refugee Agency, and the founder of The Khaled Hosseini Foundation, a nonprofit which provides humanitarian assistance to the people of Afghanistan .

Book Description Viking Press, 2007. Hardcover. Condition: New. Dust Jacket Condition: New. 1st Edition. Born a generation apart and with very different ideas about love and family, Mariam and Laila are two women brought jarringly together by war, by loss and by fate. As they endure the ever escalating dangers around them?in their home as well as in the streets of Kabul?they come to form a bond that makes them both sisters and mother-daughter to each other, and that will ultimately alter the course not just of their own lives but of the next generation. Seller Inventory # 007253

Book Description Viking Press, 2007. Hardcover. Condition: New. 1st Edition. " After more than two years on the bestseller lists and over four million copies in print, Khaled Hosseini returns with a beautiful, riveting, and haunting novel of enormous contemporary relevance.-A Thousand Splendid Suns is a breathtaking story set against the volatile events of Afghanistan?s last thirty years?from the Soviet invasion to the reign of the Taliban to post-Taliban rebuilding?that puts the violence, fear, hope, and faith of this country in intimate, human terms. It is a tale of two generations of characters brought jarringly together by the tragic sweep of war, where personal lives?the struggle to survive, raise a family, find happiness?are inextricable from the history playing out around them.-Propelled by the same storytelling instinct that made The Kite Runner a beloved classic, A Thousand Splendid Suns is at once a remarkable chronicle of three decades of Afghan history and a deeply moving account of family and friendship. It is a striking, heart-wrenching novel of an unforgiving time, an unlikely friendship, and an indestructible love?a stunning accomplishment.". Seller Inventory # 011955