Items related to The Log from the Sea of Cortez

Steinbeck, John The Log from the Sea of Cortez 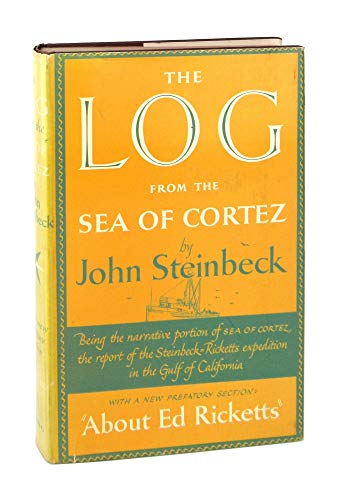 In the two years after the 1939 publication of Steinbeck’s masterful The Grapes of Wrath, Steinbeck and his novel increasingly became the center of intense controversy and censorship. In search of a respite from the national stage, Steinbeck and his close friend, biologist Ed Ricketts, embarked on a month long marine specimen-collecting expedition in the Gulf of California, which resulted in their collaboration on the Sea of Cortez. In 1951, after Ricketts’ death, Steinbeck reissued his narrative portion of the work in memory of his friend and the inspiration for Cannery Row’s “Doc”. This exciting day-by-day account of their journey together is a rare blend of science, philosophy, and high-spirited adventure. This edition features an introduction by Richard Astro.

In 1940 Steinbeck sailed in a sardine boat with his great friend the marine biologist, Ed Ricketts, to collect marine invertebrates from the beaches of the Gulf of California. The expedition was described by the two men in SEA OF CORTEZ, published in 1941. The day-to-day story of the trip is told here in the Log, which combines science, philosophy and high-spirited adventure.

Nobel-Prize winning author John Steinbeck is remembered as one of the greatest and best-loved American writers of the twentieth century. His complete works will be available in Penguin Modern Classics.

Book Description Hardcover. Condition: Good. No Jacket. Item is in good condition. Some moderate creases and wear. This item may not come with CDs or additional parts including access codes for textbooks. This may not have a dust jacket. Might be an ex-library copy and contain writing/highlighting. Photos are stock pictures and not of the actual item. Seller Inventory # DS-0670436054-3

Book Description Hardcover. Condition: Good. No Jacket. Dust jacket missing. Shelf and handling wear to cover and binding, with general signs of previous use. No extraneous markings, with the exception of previous owner's name on fly-leaf. Clean readable copy. All pages are intact and bindging is strong. Wear to spine edges. Fading on spine. Secure packaging for safe delivery. Seller Inventory # 1326006339