Items related to An Unfinished Journey 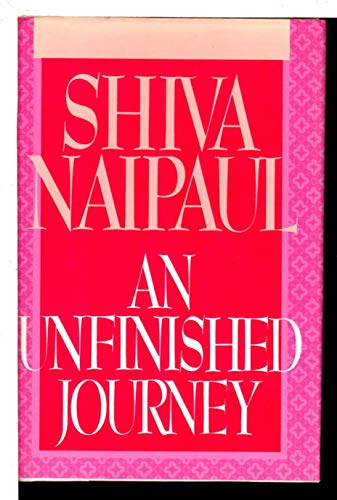 Contains articles about the Third World, the India of the Nehrus, the aborigines of Australia, Sri Lanka, and the author's relationship with his brother, V.S. Naipaul

The late author's father-in-law, Douglas Stuart, provides a moving introduction to this collection of essays. Within months of his 40th birthday in 1985, Naipaul died suddenly, while writing a book on Australia. A large part of that final project is included here, a vital work executed with the sensitivity and skill that mark the author's novels ( Fireflies, etc.) and nonfiction. Other pieces describe Shiva's relationship with his famous brother, V. S. Naipaul, 15 years older; tragic upheavals in India and the failures of that country's leaders. Perhaps the most impressive example of Shiva's perceptions and social conscience is found in his essay "The Illusion of the Third World." Quoting definitions from American, British and Australian dictionaries, he forces one to recognize discrepancies in nationalistic views on humans.
Copyright 1987 Reed Business Information, Inc.