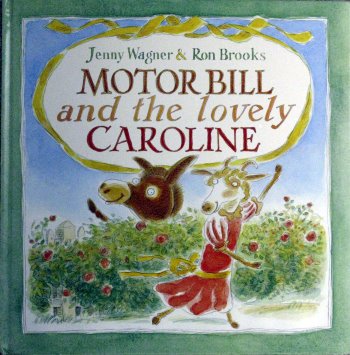 Bill was the only person in his street who had a car, but because he didn't go to school and couldn't tie his shoelaces, nobody believed his car was real. Even the lovely Caroline didn't really believe it until the day they went for a picnic together and she taught him how to tie a bow.

In this sweet but ambiguous tale, romance blossoms between a dumpy donkey and a glamorous goat. Motor Bill, the former, earns his "Motor" prefix by pretending to drive a wooden car through town (which, oddly, is populated by indulgent humans rather than other animals). Caroline is kind to Bill, and one day he invites her on a picnic. They "drive" to the country in Bill's wagon, share a transcendent lunch during which Bill learns to tie a proper bow, and finally cruise home in an imaginary convertible ("In the dusk, with no one to see, Caroline found herself believing completely"). Wagner, who previously collaborated with Brooks on John Brown, Rose, and the Midnight Cat, is vague about Bill's and Caroline's ages, and the well-intentioned but unambitious Bill doesn't seem a likely match for the refined Caroline. Whether the two find true love is left unanswered ("When Bill got older... he never forgot how he learned to tie a bow. Neither did Caroline"), and readers may desire greater definition. Brooks's sheer watercolors in ethereal summertime hues lend the story a gentle lyricism; the scenes of Bill and Caroline's picnic glow with dreamy light that's almost worthy of a string quartet. Ages 4-7.
Copyright 1995 Reed Business Information, Inc.

PreSchool-Grade 2?Bill (a donkey) had a wooden toy car. "But he didn't have a job, couldn't tie a bow, and spent all day playing in his yard, and so no one believed his car was real." When a lovely goat named Caroline, who "believed him, almost," admires his vehicle, he offers to give her a lift. They go on a picnic together, she teaches him to tie a bow, and they drive off into the sunset in an apparently real convertible. Caroline "found herself believing completely." Although the large-sized pen and watercolor artwork, done in soft golds, browns, and greens, is interesting and appealing, this plotless "animal romance" won't hold the attention of young children. Themes of affirming differences, the importance of validation, and the power of love are better handled in many other picture books.?Janet M. Bair, Trumbull Library, CT
Copyright 1995 Reed Business Information, Inc.

Shipping: US$ 8.55
From United Kingdom to U.S.A.
Destination, rates & speeds

Book Description Hardback. Condition: Very Good. The book has been read, but is in excellent condition. Pages are intact and not marred by notes or highlighting. The spine remains undamaged. Seller Inventory # GOR003118837

4. Motor Bill and the Lovely Carol