Items related to Last Go Round: A Real Western

Last Go Round: A Real Western 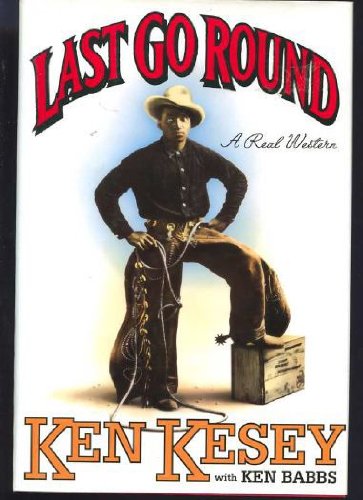 Summoning up the bare bones of Oregon lore, a rip-snorting tale of the true Old West pits three good friends against one another for the World Championship Broncbusting title during the first Pendleton Round-Up of 1911. 50,000 first printing. $50,000 ad/promo.

Ken Kesey was born in 1935 and grew up in Oregon. He graduated from the University of Oregon and later studied at Stanford with Wallace Stegner, Malcolm Cowley, Richard Scowcroft, and Frank O' Connor. One Flew Over the Cuckoo's Nest, his first novel, was published in 1962. His second novel, Sometimes a Great Notion, followed in 1964. His other books include Kesey's Garage Sale, Demon Box, Caverns (with O. U. Levon), The Further Inquiry, Sailor Song, and Last Go Round (with Ken Babbs). His two children's books are Little Tricker the Squirrel Meets Big Double the Bear and The Sea Lion. Ken Kesey died on November 10, 2001.

Kesey, whose credentials as a novelist are well established, takes a light-hearted look at the very first Pendleton Round-Up. In fleshing out his three main characters, an African-American, a Native American and a spirited white boy from Tennessee, Kesey is more interested in scene-setting than in providing clear narrative--an essential ingredient in any audiobook. As for Kesey's reading, he's incapable of raising his voice above an abrasive whisper. D.A.W. (c)AudioFile, Portland, Maine

1. Last Go Round: A Real Western

2. Last Go Round: A Real Western