Items related to Pictures and Passions: A History of Homosexuality in...

James M. Saslow Pictures and Passions: A History of Homosexuality in the Visual Arts

Pictures and Passions: A History of Homosexuality in the Visual Arts 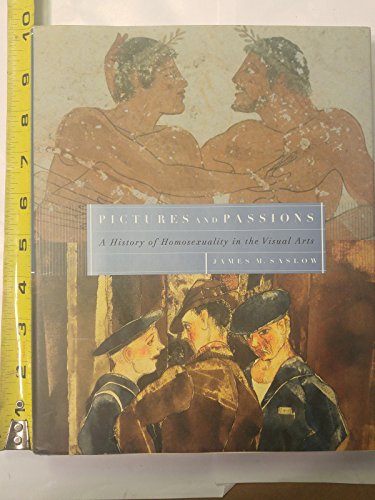 Covering the history of homosexuality in art, this comprehensive chronicle of gay and lesbian visual expression covers the field, from the sexual practices of prehistoric people, to satirical Medieval art, to the emergence of modern-day gay institutions. 12,500 first printing. Tour.

James M. Saslow, a graduate of Princeton and Columbia universities, for many years New York Arts Editor for The Advocate, is a professor in the Department of Art at Queens College and the Graduate Center of the City University of New York. His books include Ganymede in the Renaissance: Homosexuality in Art and Society. He lives in New York City.

With over 150 photographs and prints (32 in full color) of homoerotic art, this volume brings together three millennia of queer images into one extraordinary volume, a mini-Louvre dedicated to the various incarnations of homosexuality throughout the centuries. The scope of Saslow, long the New York arts editor of the Advocate and now a professor of art at the CUNY Graduate Center, is all-encompossing: he takes the reader from the classical worlds of Greece and Rome to the present-day streets of New York, from Cretan bronze plaques of the seventh-century b.c. to Tom of Finland's gay erotica of the 1960s. Though Saslow looks primarily at the Western tradition, he also turns his attention to homoerotic art in the Middle East, Asia, and pre-Columbian America. One of this books greatest strengths is that it doesnt attempt to present a purified or sanitized version of homosexuality, nor does it only delineate positive depictions of homoeroticism. Saslow pays close attention to how hostile images, such as those of the Nazis' ``Degenerate Art'' traveling exhibit, play upon stereotypes to demonize gay men and lesbians. What is especially remarkable is how Saslow illuminates his considerations of the artworks with analyses of the social and cultural conditions of the societies which created them. This book doesnt merely cull queer art into a coffee-table book for a prefabricated gay and lesbian audience; it reads the art as a measure of the artists and their cultures. The final result is academic writing at its best: informational for Saslow's fellow art historians, instructive and illuminating (yet not pedantic) for the lay reader. Saslow describes his work as a map, not a close-up, of queer art. With this map in hand, the reader is ready for an exciting and rewarding journey into 3,000 years of homoerotic images, a trip which offers innumerable opportunities to ponder the visual beauty of the queer. -- Copyright ©1999, Kirkus Associates, LP. All rights reserved.

1. Pictures and Passions: A History of Homosexuality in the Visual Arts

2. Pictures and Passions: A History of Homosexuality in the Visual Arts

3. Pictures and Passions: A History of Homosexuality in the Visual Arts James M. Saslow