Items related to Dalai Lama, My Son: A Mother's Autobiography 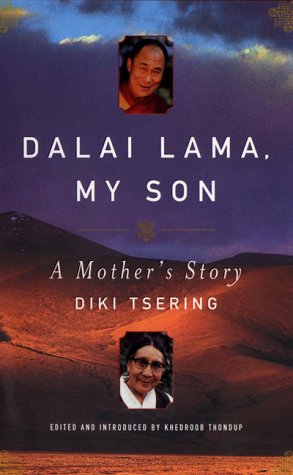 The story of the Dalai Lama's mother describes in her own words her feelings about her son being recognized as a living Buddha, her childhood in turn-of-the-century Tibet, her witness to the Chinese invasion, and her observations during her son's formative years. 50,000 first printing.

The Dalai Lama's mother was illiterate but was a natural storyteller. When her granddaughter asked her to talk about her life, the stories began to roll out. She told of her wedding at the age of 16, her state of virtual servitude as a married woman, murderous ghosts, and her two dead sons left for the birds. Then, after a three-year drought and other strange events preceding the birth of her fifth child, the lamas came from Lhasa, and her Cinderella future was cinched. With her son the Dalai Lama ensconced in his palace, this nondescript peasant woman whose 16 children yielded three incarnate lamas, strolled her garden estate and hobnobbed with the aristocracy. And yet the intrigue, the perils of domestic and international politics, would soon take her husband's life, drive her remaining children into exile, and have her yearning for the quiet drudgery of her former life. Diki Tsering speaks with the unadorned simplicity of an ordinary country girl about a life that was anything but ordinary. --Brian Bruya

Book Description Viking Adult, 2000. Hardcover. Condition: New. 1st Edition. BRAND NEW-CRISP AND UNREAD-FIRST EDITION-FIRST PRINTING-" Told in the first-person and accompanied by photographs from family archives, this autobiography follows Diki Tsering, a poor girl born in 1901, the Year of the Ox, to a peasant family, who eventually marries at age sixteen and gives birth to the future H.H. Dalai Lama. The story is told chronologically, giving readers a personal look at His Holiness as a small child. It tells of his personality and upbringing, and what it's like for a mother to watch her son become one of the most recognized faces in the world. Her story ends in 1959 with her chronicle of the Chinese invasion of Tibet and the family's escape and eventual exile.". Seller Inventory # 012982