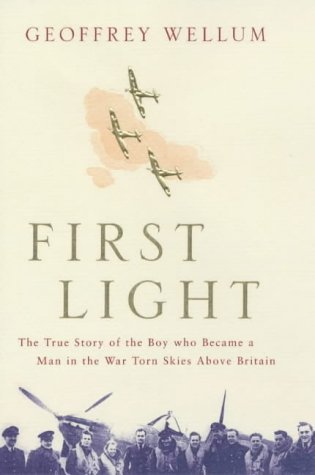 An account of "Boy" Wellum, one of the youngest fighter pilots in the Battle of Britain. Enlisting in the RAF weeks before the outbreak of World War II, Geoffrey Wellum found himself fighting the Germans over the English Channel, a Spitfire pilot at just 18 years of age. This memoir follows Geoffrey through early (disastrous) training sessions, his first solo flights, his first battle and a harrowing account of being lost at sea. He describes the unique, exhilarating experience of flying a Spitfire and, also, the terrible toll that it takes on the young mind and body. At the age of 21 he is worn out physically and mentally. His war is at an end.

"Never in the field of human conflict was so much owed by so many to so few."
–Winston Churchill, 1940

Geoffrey Wellum was one of Churchill’s "few," the gallant pilots of the RAF who streaked through the skies to repel the massive, brutal Nazi bombing assaults that killed thousands and leveled entire cities throughout the endless months of the Battle of Britain. To a man, they were courageous, determined, and oh, so young. Geoffrey, known as Boy to his comrades, was a good deal younger than most.

In First Light, Geoffrey Wellum tells the inspiring, often terrifying true story of his coming of age amid the roaring, tumbling dogfights of the fiercest air war the world had ever seen. It is the story of an idealistic schoolboy who couldn’t believe his luck when the RAF agreed to take him on as a "pupil pilot" at the minimum age of seventeen and a half in 1939. In his fervor to fly, he gave little thought to the coming war.

Writing with wit, compassion, and a great deal of technical expertise, Wellum relives his grueling months of flight training, during which two of his classmates crashed and died. He describes a hilarious scene during his first day in the prestigious 92nd Squadron when his commander discovered that Wellum had not only never flown a Spitfire, he’d never even seen one.

Boy soon learned the golden rule of the dogfight: "Never fly straight and level for more than twenty seconds. If you do, you’ll die." Wellum’s vivid accounts of ferocious aerial combat contrast the mortal terror of an innocent teenager with the grim determination of a highly trained warrior intent on doing his job–blasting the enemy one moment, desperately trying to shake off a pursuer the next. Few writers have succeeded more completely in evoking the chaos and horror of war.

A battle-hardened ace by the winter of 1941, though still not out of his teens, Boy flew scores of missions as fighter escort on bombing missions over France. Yet the constant life-or-death stress of murderous combat and anguish over the loss of his closest friends sapped endurance. Tortured by fierce headaches, even in the midst of battle, he could not bear the thought of "not pulling your weight," of letting other pilots risk their lives in his place. Wellum’s frank account of his long, losing bout with battle fatigue is both moving and enlightening.

Filled with affectionate portraits of Boy’s fellow fliers–many of whom did not survive the war–First Light tells an unforgettable true story of patriotism and fear, pride and humility, self-sacrifice and triumph. Already a bestseller in England, this powerful and compelling memoir is destined to become a classic, not only of military history, but also of literature.

"Wellum's First Light deserves to be read for many years to come."
-The Times (of London)

"An extraordinarily gripping and powerful story."
-The Evening Standard (London)

"A work of exceptional quality . . . a passion and immediacy which make it compelling reading."
-Max Hastings, author of Overlord: D-Day and the Battle for Normandy

"A remarkable book, amazingly fresh, honest, and modest . . . utterly gripping; it is without question one of the best books I have read in the last few years."
-Professor Richard Holmes, author of Redcoat: The British Soldier in the Age of Horse and Musket

"Startlingly vivid recollections . . .this is air war at its most intense . . . his readers get a strong sense of immediacy."
-The Spectator (London)

"Geoffrey Wellum's book is a wonderfully evocative find . . . a book for all ages and generations, a treasure."
-Daily Express (London)