Items related to The Heart of a Thirsty Woman

Witt, Lana The Heart of a Thirsty Woman

The Heart of a Thirsty Woman 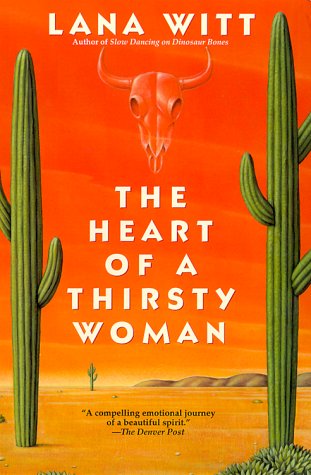 The year is 1976. Josie Tolliver lives in Pick, Kentucky, but her heart yearns to flee the small town. She spends her days reading Shakespeare and Carlos Castaneda and longing for the rarefied beauty of an Arizona sunset. She dreams of pursuing her passions in the desert town of Sage, where she lived briefly as a child -- and where, just maybe, she might find her sister Cheyenne, who disappeared when Josie was a teen. The only problem is that her husband Clarence, a TV repairman with dreams of starting the first satellite-dish business in Pick, is dead set against moving. After Josie's misguided but hilarious attempt to teach Pick about Castaneda backfires, even Clarence agrees it's time to leave town. The incongruous couple heads to Sage, where Josie rushes headlong into a whirlwind search for Cheyenne, self-knowledge, Castaneda's Don Juan -- and other mysteries that might help ease her unquenchable thirst for living.

Lana Witt is also the author of Slow Dancing on Dinasour Bones. She grew up among the dark green hills of eastern Kentucky. Although these days Ms. Witt very much lives on a road between different realities, she now gets her mail near a canyon in San Diego.

Clarence and Josie lie bowed together in the dark bed after a slow session of lovemaking. Outside silence has descended on the mountain, and all is quiet except the soft rustle of leaves. Clarence's arm is draped around his wife's shoulder, his hand resting on her collarbone as she talks. Josie has been talking nonstop for weeks, telling every story she can dredge up from her childhood, talking about weird topics too, at least Clarence thinks they're weird. Although she turned twenty-seven last month, Clarence figures she acts more like a twelve year old than anything else. He's beginning to worry she'll never grow up.

Lately she's been going on and on about separate realities -- saying a tree isn't necessarily a tree just because it looks like one, that there's a good chance it's an ancient spirit of some kind -- and she claims to have seen things, dark shadowy things, out of the corners of her eyes. The other night she told him she'd had an out-of-body experience, that she'd come out of herself somehow. Josie is a bookworm. Lying on top of her bookshelf is an annotated Shakespeare that she's read over and over again. Half the time she'll pretend to be some crazy person from one of the plays. just last night she was prancing around, shouting, "0 heat, dry up my brains! tears seven times salt/Burn out the sense and virtue of mine eye!"

"Why the hell do you do that? What good is it, Josie?" Clarence asked.

For months she's been studying the I Ching, a little green book that has Clarence mystified. She's also been reading books by Carlos Castaneda, who writes about an old Yaqui Indian named don Juan. Don Juan has some pretty strange notions that she has sunk her teeth into hard and fast. Among them is the one about the separate realities. Clarence believes something is going more and more wrong with Josie, but still he tries to listen as she talks.

"It was when we was in Arizona back in '58, '59," she's saying, "when Daddy had got that job in a copper mine." Josie sounds as though she's giving a report to a class at school, as if she has to include all the facts and get them straight. "We just stayed out there a year. At first we lived in the town of Rustle, but when school got out that summer we moved up to the mountains to this little place called Sage. Cheyenne was still alive then. She was fourteen years old, and I was ten. I don't remember nothing being in Sage but two or three houses, a post office, church, and store. And, of course, that big old Mexican mansion made out of adobe. I guess you'd call it a hacienda, I don't know. They'd turned it into a apartment building for the miners, and we lived on the bottom floor. It had walls a foot thick and French doors. God, I love French doors."

"A hacienda?" Clarence asks, wondering where this story is leading. He sighs, hoping Josie doesn't branch off on more weird tales from don Juan and his Yaqui way of knowledge. Wasn't that where don Juan was from? Arizona?

"Anyway when Daddy got laid off at the copper mine, we had to move back here to Kentucky," Josie says. "The day we packed up to leave, me and Cheyenne was so excited we kept running from one room to the other. just the sight of that U-Haul trailer hitched to the back of our '56 Ford was too much to take, I reckon. Besides we'd been holed up for months in the apartment -- Cheyenne laying in bed with her bad heart most of the summer -- and it was too hot to go outside anyway."

"I remember that Ford," Clarence mutters, trying to latch onto something good and solid and American.

"Daddy was out front checking under the hood, and he was yelling at the same time,'Come on. Let's get out of here before it gets dark!' Mommy didn't make a move, though, just stood there at the front door staring out. It was evening and the sun was setting. All at once she turned to me and Cheyenne and said, 'Settle down, you fellers, and look at this. It may be the last Arizona sunset you'll ever see. 'But we wouldn't pay attention, kept trying to get past her to the outside, jumping up and down and yelling like fools, even though Mommy had already warned us that Cheyenne was goin to have another heart attack if she didn't keep still."

As Josie talks, Clarence runs a hand over the contours of her body, runs his fingers through her hair, now tangled and spilling over the pillow. Her wild chestnut hair was the thing that attracted him in the first place, that and her pale gray eyes. He tries to remember how she looked when she was a child, but he can't get a clear picture. All he remembers is that she couldn't play marbles worth a shit. Josie's sister, Cheyenne, was in the same grade as Clarence when they were in school -- he remembers her as a bold streak shooting down hallways, shouting out her latest plans to skip class. Clarence brings himself back to the present, back to the sound of Josie's voice. Her voice is soft as feathers.

"Mommy put her hands on her hips and glared at us, mad as a wet hornet," Josie tells Clarence. "We stopped dead in our tracks because we knew that look in her eye. When Mommy was riled, she wouldn't no one to fool around with. She said, 'You fellers ought to never leave a place, just throw it aside, without stopping to think about it for a minute. I know you don't realize this now, but you really may never see a Arizona sunset again. Right now you prob'ly think you can just move back here any time you want to, but that's not the way it is. Sometimes you turn a corner and can never get back to where you were before.'

"Cheyenne got on one side of her and me on the other, and we all stood at the door looking out. I've never seen anything like it since -- it was so pretty it made you sad. The sky right around the horizon was this beautiful red-orange, tinged with blue, green, purple, and gold. We leaned there against the door -- facing quiet as mice and let all that color sink inside us. Mommy could always do that -- make you see every side of a thing, the sadness right along with the excitement. And there was this little hill...I guess you'd call it a hill. Anyway all at once this cowboy came riding along it. He was completely silhouetted in the sunset, and there was two or three cactuses there, growing along the top. You know, the saguaros? And they was silhouetted too. I'm telling you, Clarence, it took my breath, it was so beautiful. It was a gift, a parting gift from Arizona. And if it wasn't for my mother making me and Cheyenne settle down, we'd have lost out on the whole thing."

Josie stops talking for a minute and stares out the window at the moonlight, tears shining in her eyes. "Cheyenne got missing a few months after we come back here. She's dead, I reckon, or may as well be. Anyway we never found her, and Mommy died that same year."

Josie waits for Clarence to say something, but he doesn't

"Well, I'm still here, at least I think I am. You're here, and Daddy is too. I want us to move out West. I don't want that Arizona sunset back in 1959 to be the last one I'll ever see. I want to prove my mother wrong, at least where I'm concerned."

He's breathing deeply, his hand lying heavy in her hair.

Clarence still doesn't answer, but he begins to tick. When Clarence Tolliver sleeps, he doesn't snore, he ticks. Josie has never been able to figure out if he's tapping his tongue on the roof of his mouth or if the sound comes from a vibrating membrane in his nose or if his tonsils keep detaching and reattaching themselves to small mysterious growths at the back of his throat.

"Well, goddamned, son of a bitch!" she shouts and, jumping out of bed, runs out of the house, her stomach aching as if it's weighted down with lead balls.

Their house is a small two-bedroom at the head of a hollow, deeded to th

1. The Heart of a Thirsty Woman

2. The Heart of a Thirsty Woman

3. The Heart of a Thirsty Woman Witt, Lana

4. The Heart of a Thirsty Woman Witt, Lana