Items related to Before I Say Good Bye Unabridged Unabridged 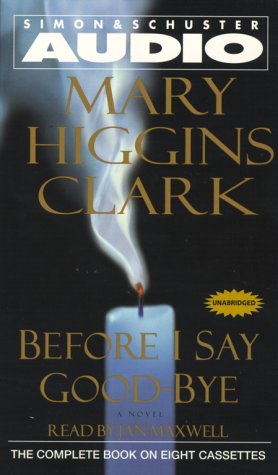 Mary Higgins Clark, America's "Queen of Suspense," delves into the mystery of psychic powers in her gripping new thriller, Before I Say Good-Bye.

When Adam Cauliff's new cabin cruiser, Cornelia II, blows up in New York harbor with him and several close business associates aboard, his wife, Nell MacDermott, is not only distraught at the loss but wracked with guilt because she and Adam had just had a serious quarrel and she had told him not to come home.

As the investigation into the boat's explosion proceeds, Nell is shocked by the official confirmation that it was not an accident but the result of foul play. Was Adam the target of the explosion? As Nell searches for the truth about Adam's death, she receives messages from Adam transmitted by a medium. What she does not know is that she is being closely watched, and the nearer she comes to learning what actually happened on the boat that night, the nearer she is to becoming the next victim of a ruthless killer.

Mary Higgins Clark's 22nd romantic thriller is destined for bestsellerdom on the strength of her reputation alone. Which is not to say that Before I Say Good-Bye doesn't have a bit of all the ingredients of the Clark genre: a little mystery, a likable heroine, and even a nice guy who turns up midway through the novel and promises her romance and a second chance at happiness. But while the set-up is promising and the bare essentials of a compelling read are all here, only readers who are already Higgins fans will be kept completely spellbound.

Nell MacDermott is the politically ambitious granddaughter of a canny politician in Manhattan's silk stocking district, and her grandfather wants her to run for his old congressional seat. But there are rumors that Adam Cauliff, Nell's husband, has been involved in a real estate and construction scam, and until Nell gets to the bottom of this her political future will be clouded. When Adam and his assistant are killed in an explosion aboard his boat, Nell is determined to clear his name. Nudged into action by her nascent psychic powers and a medium who may be her only link to Adam, Nell learns more about her husband's mysterious past than she bargained for and--naturally--stumbles onto a conspiracy that puts her own life in danger. The narrative seems more like an outline for a novel than a novel itself; the characters are sketched rather than fully explored--particularly Nell, whose back story doesn't provide enough information to make her actions understandable. But the pacing is expert, and Clark's dedicated fans will doubtless forgive her for not making this her strongest outing. --Jane Adams

#1 New York Times bestselling author Mary Higgins Clark has written thirty-two suspense novels; three collections of short stories; an historical novel, Mount Vernon Love Story; and a memoir, Kitchen Privileges and two children’s books, The Magical Christmas Horse and Ghost Ship. She is the coauthor with Carol Higgins Clark of five suspense novels: Dashing Through the Snow, Deck the Halls, He Sees You When You’re Sleeping, The Christmas Thief, and Santa Cruise. More than 100 million copies of her books are in print in the United States alone, and her books are worldwide bestsellers.

1. Before I Say Good-bye

Book Description Simon & Schuster Audioworks, Riverside, New Jersey, U.S.A., 2000. audio Book. Condition: Good. Eight RELIABLE cassette tapes in the original case. Some shelf wear to the printed box. Former owners name on a sticker on the front of the box. Some scuff and fold Mark to the box. The tapes inside are sturdy and presentable. Enjoy this audio cassette performance! Unabridged !. Seller Inventory # AudioBox6000021

3. Before I Say Good-bye

Book Description Simon & Schuster Audioworks, Riverside, New Jersey, U.S.A., 2000. Audio Book. Condition: Good. 8 RELIABLE and sturdy audio cassette tapes withdrawn from the library. Some shelf wear and library markings to the clamshell box and the cassettes. Some library stickers to the front and back of the box. The eight cassettes sit inside tested and clear sounding. Enjoy this worthwhile audio performance!. Seller Inventory # L8Audio41510014