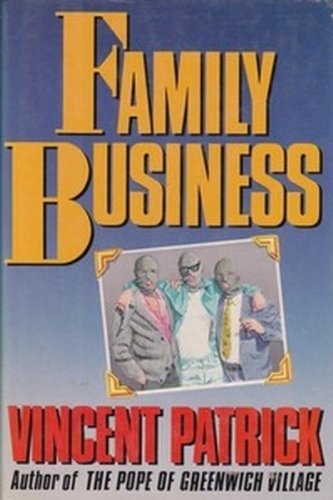 The men of Brooklyn's McMullen family follow Grandpa Jesse, some reluctantly, into one last criminal scam--involving genetic engineering--that will set them all up for life

Vincent Patrick has a work background appropriate for a novelist’s book jacket. Born in the Bronx, New York, he finished both high school and engineering college at night and has had a remarkable range of jobs. He’s been a door-to-door Bible salesman, bartender, restaurant owner, Standard-bred Pacer owner, vice-president of an engineering consulting firm, teacher in a community college (writing fiction in the off-hours from his late teens.) After the publication of his first novel, The Pope of Greenwich Village, he wrote screenplays for many years, including the script for the movie, The Pope of Greenwich Village (with Micky Rouark and Eric Roberts). He also wrote the screenplay for the movie of his this, his second novel, Family Business (Sean Connery, Dustin Hoffman and Mathew Broderick, Directed by Sidney Lumet).

In the exuberant style of The Pope of Greenwich Village, Patrick explores the volatile relationship among three New Yorkers whose irreconcilable moral codes wedge them apart. Adam McMullen, his father Vito, and Vito's father Jessie share affection, plus an oddly mixed heritagethey are part Cherokee Indian, Irish, Jewish, and Italianbut their differences at times seem overwhelming. Adam had disappointed Vito by abandoning college for a nomadic lifestyle, and Vito is also piqued by Adam's idolization of his grandfather. An adept hustler and former bank robber, Jessie blithely violates the law whenever it seems expedient. Vito, an ex-burglar himself, openly deplores his father's criminality. When Adam and Jessie start collaborating on a lucrative heist, Vito bristles, but he participates out of boredom and a desire to safeguard Adam. Unfortunately, the caper turns into a nightmarish debacle that threatens to destroy the trio's fragile truce forever. Patrick deftly intersperses uproarious humor with memorable dramatic scenes. Foreign rights: William Morris. October 30
Copyright 1985 Reed Business Information, Inc.