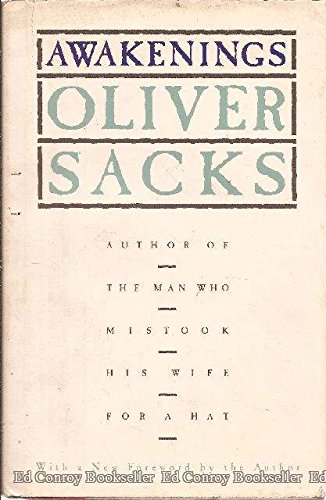 It hardly seems fair that so many great doctors are also great writers. Perhaps it's qualities like sensitivity, craft, and dedication that keep physicians like Oliver Sacks in hospitals all day and at writing desks all night; if nothing else, these qualities shine in books like Awakenings. This powerful set of case histories rises above its pathological foundation to find new literary territory, a medical-spiritual synthesis equally stimulating for the mind and the soul. It's no wonder Hollywood producers chose to turn it into a feature film--anyone can see the universal human struggle against bondage and despair in these pages.

The sleeping-sickness epidemic of 1918 caused hundreds of survivors to slip into a bizarre rigid paralysis with similarities to advanced Parkinson's disease. These patients, only occasionally able to communicate or move, were nearly all institutionalized for life, their ranks increasing every now and then with similarly afflicted men and women. Sacks came to work at a long-term care facility shortly before the first exciting results with L-dopa and Parkinson's in the late 1960s; his patients soon embarked on dramatic, difficult recoveries from up to 50 years of torpor. He documents their spiritual and medical obstacles with great care to portray their individual personalities, long suppressed but finally released. Though many great doctors are also great writers, few can compare with Oliver Sacks for expressing the relation of medicine to the human spirit. --Rob Lightner

"One of the most beautifully composed and moving works of our time." --"The Washington Post
"Compulsively readable. . . . Dr. Sacks writes beautifully and with exceptional subtlety and penetration into both the state of mind of his patients and the nature of illness generally. . . . A brilliant and humane book." --A. Alvarez, "The Observer
Awakenings--which inspired the major motion picture--is the remarkable story of a group of patients who contracted sleeping-sickness during the great epidemic just after World War I. Frozen for decades in a trance-like state, these men and women were given up as hopeless until 1969, when Dr. Oliver Sacks gave them the then-new drug L-DOPA, which had an astonishing, explosive, "awakening" effect. Dr. Sacks recounts the moving case histories of his patients, their lives, and the extraordinary transformations which went with their reintroduction to a changed world.
"[Sacks] opens to the reader doors of perception generally passed through only by those at the far borders of human experience." --"The Boston Globe
"A masterpiece." --W. H. Auden