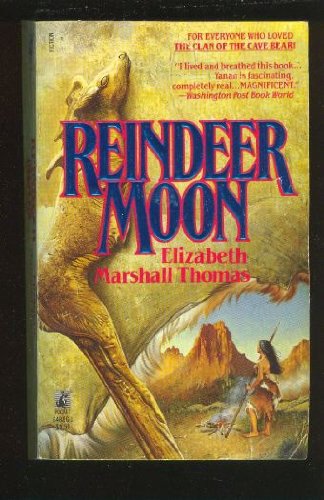 A fictional account of the life of a Siberian tribe 20,000 years ago, from the author of "Harmless People" and "Warrior Herdsmen". It is both the story of a daily struggle for survival against starvation, cold and violence, and an evocation of spiritual journeys and primitive magic.

Those familiar with the author's landmark study, The Harmless People, will not be surprised at the range of anthropological information she brings to her first novel, or at the lucidity of her prose. What will astonish, engross and move readers in her narrative of a group of hunter-gatherers who lived 20,000 years ago is the dramatic immediacy of the story and the depth and range of character development. A whole culture is imaginatively and authoritatively illuminated, people who live in lodges observing a complex series of societal rules and taboos built around the interrelationships between families that constitute a lineage. It is a life of privation, in which hunger, danger and violence are pervasive. Survival depends on close observation of and intimacy with the animals they use both as role models and as food, and an understanding of the seasonal rhythms governing the annual migrations. We meet the protagonist, Yanen, as a young girl, living with her family in what is now Siberia. Just a few chapters into the narrative, she dies and becomes a spirit who must serve the members of her lodge by finding food for them, often by taking on the form and behavioral characteristics of animals or birds. The story proceeds in flashback as Yanen relates the memories of her youth: the death of her mother after childbirth and of her father from hunting wounds, leaving Yanen and her baby sister alone in desolate country; their fearsome trek to rejoin other members of their lineage; Yanen's marriage; the rash deeds that cut her off from the people she loves and the tragic mistake that seals her fate. Thomas never romanticizes her characters, nor does she demean them by arch language or a patronizing tone. Yanen is an enchanting young woman: intelligent and courageous, an excellent hunter, but also headstrong and hot-tempered. Other characters are equally as vivid, and as involving of the reader's emotions. Suspenseful, insightful, poignant, this novelthe first to be issued under the Davison imprintis a remarkable achievement.
Copyright 1986 Reed Business Information, Inc.

Twenty thousand years ago in prehistoric Siberia a young girl named Yandan lived and died. Now, as a spirit, she tells the story of her life, a continuous struggle to survive. A noted anthropologist, the author is very concerned with describing the relationship between human and animal. Thus, in Reindeer Moon people take a back seat to nature. Just as the reader is engrossed in one of Yandan's life experiences, the scene shifts to an account of one of Yandan's spirit journeys, a confusing device, and one that detracts from both storylines. Comparisons between Reindeer Moon and Clan of the Cave Bear ( LJ 9/1/80) are bound to arise. Like Jean Auel, Thomas has a difficult time making prehistoric sex anything but laughable. Reindeer Moon lacks the "popular touch" that makes Auel's books best sellers; yet readers interested in the period and with an eye to nature might enjoy this. Lydia Burruel Johnson, Mesa P.L., Ariz.
Copyright 1987 Reed Business Information, Inc.