Items related to The Mote in Gods Eye 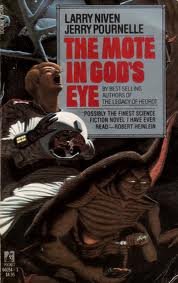 The united 'Second Empire of Man' spans vast distances, due to the Alderson Drive which has enabled humans to travel easily between the stars. After an alien probe is discovered, the Navy dispatches two ships to determine whether the aliens pose a threat... Called by Robert A. Heinlein: "Possibly the greatest science fiction novel ever written," this magnificent exploration of first contact and a truly alien society is a "must read" for science fiction fans. "As science fiction, one of the most important novels ever published." - San Francisco Chronicle "Possibly the greatest science fiction novel I have ever read." - Robert A. Heinlein "A superlatively fine novel...no writer has ever come up with a more appealing, intriguing, and workable concept of aliens." - Columbus Dispatch "A spellbinder, a swashbuckler...And, best of all, it has a brilliant new approach to that fascinating problem -- first contact with aliens." - Frank Herbert "One of the most engrossing tales I've read in year...fascinating." - Theodore Sturgeon "Intriguing and suspenseful...the scenes in which the humans and aliens examine one another are unforgettable." - Minneapolis Tribune "Nobody does it better than Niven and Pournelle" - Tom Clancy "The team of Jerry Pournelle and Larry Niven is one of the best in science fiction." - The Washington Times "Few writers have a better pedigree" - Los Angeles Times

In the year 3016, the Second Empire of Man spans hundreds of star systems, thanks to the faster-than-light Alderson Drive. No other intelligent beings have ever been encountered, not until a light sail probe enters a human system carrying a dead alien. The probe is traced to the Mote, an isolated star in a thick dust cloud, and an expedition is dispatched.

In the Mote the humans find an ancient civilization--at least one million years old--that has always been bottled up in their cloistered solar system for lack of a star drive. The Moties are welcoming and kind, yet rather evasive about certain aspects of their society. It seems the Moties have a dark problem, one they've been unable to solve in over a million years.

This is the first collaboration between Niven and Pournelle, two masters of hard science fiction, and it combines Pournelle's interest in the military and sociology with Niven's talent for creating interesting, believable aliens. The novel meticulously examines every aspect of First Contact, from the Moties' biology, society, and art, to the effects of the meeting on humanity's economics, politics, and religions. And all the while suspense builds as we watch the humans struggle toward the truth. --Brooks Peck

Writing separately, Larry Niven and Jerry Pournelle are responsible for a number of science fiction classics, such as the Hugo and Nebula Award-winning Ringworld, Debt of Honor,and The Integral Trees. Together they have written the critically acclaimed bestsellers Inferno, Footfall, and The Legacy of Heorot,among others. The Mote In God's Eye is their acknowledged masterpiece, an epic novel of mankind's first encounter with alien life that transcends the genre.