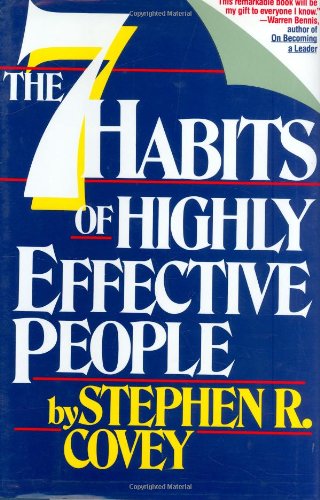 Anyone who thinks the audiocassette adaptation of Stephen Covey's bestseller, The 7 Habits of Highly Effective People, is a shortcut to reading the book has another thing coming. As a preview, the cassette is worth every one of its 90 minutes; as a substitute for the original, it will only leave you wishing for the rest. There's a reason 7 Habits has sold more than 5 million copies and been translated into 32 languages. Serious work has obviously gone into it, and serious change can likely come out of it--but only with constant discipline and steadfast commitment. As the densely packed tape makes immediately clear, this is no quick fix for what's ailing us in our personal and professional lives.

The 7 Habits Of Highly Effective People is a comprehensive program based on developing an awareness of how perceptions and assumptions hinder success---in business as well as presonal relationships. Here's an approach that will help broaden your way of thinking and lead to greater opportunities and effective problem solving. Be Pro-Active: Take the initiative and the responsibility to make things happen. Begin With an End in Mind: Start with a clear destination to understand where you are now, where you're going and what you value most. Put First Things First: Manage yourself. Organize and execute around priorities. Think Win/Win: See life as a cooperative, not a comprehensive arena where success is not achieved at the expense or exclusion of the success of others. Seek First to Understand: Understand then be understood to build the skills of empathetic listening that inspires openness and trust. Synergize: Apply the principles of cooperative creativity and value differences. Renewal: Preserving and enhanving your greatest asset, yourself, by renewing the physical, spiritual, mental and social/emotional dimensions of your nature. Stephen R. Covey is the most respected motivator in the business world today. Learn to use his 7 Habits Of Highly Effective People--and see how they can change your life.

The 7 Habits of Highly Effective People