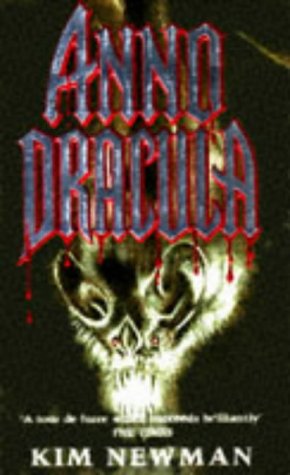 As Nina Auerbach writes in the New York Times, " Stephen King assumes we hate vampires; Anne Rice makes it safe to love them, because they hate themselves. Kim Newman suspects that most of us live with them . . . . Anno Dracula is the definitive account of that post-modern species, the self-obsessed undead." In this first of what looks to be an excellent series, Victorian England has vampires at every level of society, especially the higher ones, and they engage in incessant intrigue, power games, and casual oppression of the weak--activities, as we know, that are all too human. Numerous characters from literature and from history appear in both major and cameo roles. Spectacular fight scenes, stormy politics, and a serial vampire killer keep the action lively. A scholarly bibliography is included.

Kim Newman is a well known author: he has won the Bram Stoker, International Horror Guild, British Fantasy and British Science Fiction Awards and been nominated for the Hugo and World Fantasy Awards. He is also a renowned movie critic. His reviews appear often in Empire Magazine and he has written for The Guardian, Time Out and many others. He makes frequent appearances on radio and TV.

Book Description Paperback. Condition: Good. The book has been read but remains in clean condition. All pages are intact and the cover is intact. Some minor wear to the spine. Seller Inventory # GOR001329574

Shipping: US$ 7.13
From United Kingdom to U.S.A.
Destination, rates & speeds

Book Description Condition: Good. Ships from the UK. Used book that is in clean, average condition without any missing pages. Seller Inventory # 719513-20

Book Description Condition: Very Good. Shipped within 24 hours from our UK warehouse. Clean, undamaged book with no damage to pages and minimal wear to the cover. Spine still tight, in very good condition. Remember if you are not happy, you are covered by our 100% money back guarantee. Seller Inventory # 6545-9780671715915

Book Description Condition: Very Good. This book is in very good condition and will be shipped within 24 hours of ordering. The cover may have some limited signs of wear but the pages are clean, intact and the spine remains undamaged. This book has clearly been well maintained and looked after thus far. Money back guarantee if you are not satisfied. See all our books here, order more than 1 book and get discounted shipping. . Seller Inventory # 7719-9780671715915

Book Description Paperback. Condition: Used; Good. **Simply Brit** Shipped with Premium postal service within 24 hours from the UK with impressive delivery time. We have dispatched from our book depository; items of good condition to over ten million satisfied customers worldwide. We are committed to providing you with reliable and efficient service at all times. Seller Inventory # mon0001506433

Book Description Paperback. Condition: Used; Good. **SHIPPED FROM UK** We believe you will be completely satisfied with our quick and reliable service. All orders are dispatched as swiftly as possible! Buy with confidence!. Seller Inventory # mon0001442981