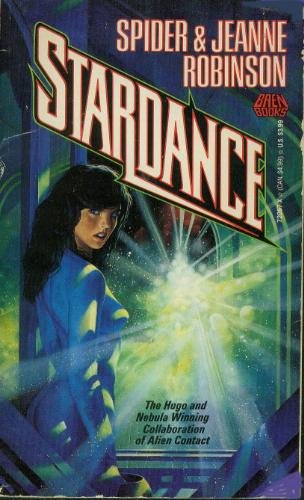 The zero-gravity environment of the orbiting Skyfac gives beautiful, sexy Shara Drummond a chance to be a dancer, though it means catering to a perverse millionaire, being forever exiled from Earth, and paying a price to communicate with alien beings

Spider Robinson is renowned for his Callahan's Place series of bestselling novels. With his late wife, Jeanne, he wrote the award-winning Stardance series. As an audiobook reader of his own and others' work, he has won the Earphones Award and been a finalist for the Audie Awards. In 2008, he won the Robert A. Heinlein Award for Lifetime Excellence in Literature.

This captivating science fiction novel is brought to life in a vivid and memorable reading by one of its authors. Who better to understand this complex work, both in its utter humanity and the complicated setting in which it exists? Spider Robinson reads with vigor and honesty, relating his tale of the unbelievable and fantastic in the most earnest of performances. The imaginative story focuses on Shara Drummond, a dancer who may save the human race with her talent. Spider's portrayal of Drummond doesn't differ much from the tone he employs for the story's omniscient narrator, but there's a slight shift in tone that gives credibility to the characters. A truly vivid tale! L.B. © AudioFile 2008, Portland, Maine-- Copyright © AudioFile, Portland, Maine