Passman, Donald S All you need to know about the music business

All you need to know about the music business 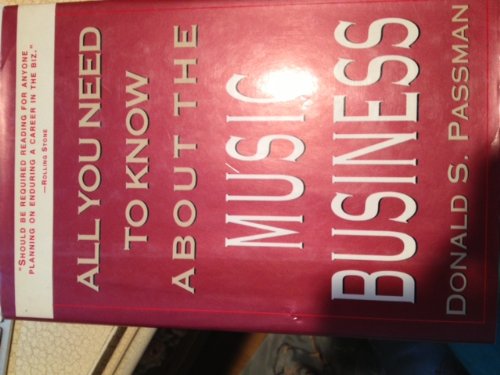 In the music business, the key to success lies in knowing how to protect yourself. To do that, you need the best and most up-to-date advice available. Whether you want a career as a performer, writer or executive, Donald Passman's comprehensive guide to the legal and financial aspects of the business is an indispensable tool. This fourth edition is packed with vital information on such subjects as record contracts, managers, music publishing, touring, fees, etc. There are also brand new chapters on the technological advances that are reshaping the business, and how novices and experts alike should manage such changes.

Our band is about to get beyond the local scene and start wrestling with the industry for record deals and national tours, so I practically jumped out of my skin when I finally found this book. It completely demystifies the workings of the entire music industry--in a musician-friendly way. A tiny, selfish neuron in me hesitated for a moment about telling the world of this book--but hey, we musicians are all in this together. If everyone negotiating with record companies read and used this book, we'd collectively be better able to get the sort of financial rewards our art deserves.

Just so you know this isn't a load of hype, here are the section and chapter titles.

Each and every chapter is full of wisdom, humor, and support, written by an actively practicing Harvard Law grad who has also been teaching music law at UCLA (a stone's throw from the heart of darkness) since 1978. From the Publisher:

Everything you've ever heard about the music business is true. It's a world where the rewards can be enormous, but the risks even greater. The key to success is knowing how the business works so you can protect yourself -- since no one will take as good care of your career as you.

That's where Donald S. Passman comes in. Because if you want the best advice, it pays to turn to the best in the business. His star-spangled list of clients shows that his advice is the best that money can buy. Now, from one of the music industry's most sought-after lawyers, here is the third revised and expanded edition of the book that the Los Angeles Times has proclaimed "the industry bible" -- the savvy insider's guide to every legal and financial facet of the business.

Whether you want a career as a performer, writer, producer, or executive, or whether you are just curious about the fascinating multibillion-dollar music industry, you will benefit enormously from this fully updated, comprehensive, and easy-to-read overview of the entire business.

1. All you need to know about the music business

2. All you need to know about the music business Passman, Donald S